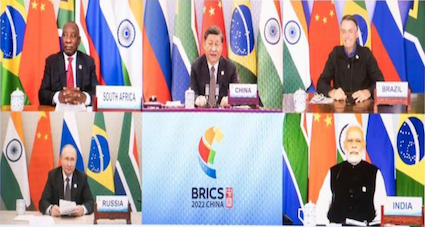 Too much is made of India-China standoff at borders and too little attention is paid to the two Asian neighbours putting shoulders together in creating a new world order.

Both are looking for alternate financial structures; both are for new models of trade and investment in Global South; both won’t differ if a new global reserve currency is floated; both see a virtue in expanding BRICS; both seek peaceful solutions to conflicts and both would like a stop on terrorism and nuclear weapons.

So what we are misreading about a country which props up Pakistan or the other one which is part of QUAD’s existential design on the former?

Are they friends? Enemies? Or both?

Or we plug into their own nuances which doesn’t confuse domestic imperative with one for the world?

The domestic imperative is that both keep each other honest by bringing fire next to other’s door (Pakistan and Indo-Pacific). India is uncomfortable with the trade imbalance; China with India growing too big too suddenly.

But that’s how geopolitics-in-neighbourhood has always worked: Great Britain and France have always feared a German dominance; US a united South America. We know how Romans and Ottomans came to grief with weak borders; or Habsburgs for that matter.

But when it comes to world, both see the United States with its Anglo-Saxon partners, in cahoots with “liberal democracies” and the globalist agenda in the name of free trade, stifling growth and independence, unconcerned if the Rest reel under a pandemic or a broken food supply chain.

They understand that Ukraine issue is a manufactured one and being escalated every day, never mind if the humanity itself comes to a grief to the benefit of a few.

They are acutely aware that Western military interventions in Asia, Africa and Latin America, the proxy wars, destabilization has all but thrown humanity under the bus.

They witness a compromised United Nations which turns its back when unilateral sanctions are imposed; which has no time to question if US-backed labs in Ukraine were engineering biological weapons; which is indifferent to Africa that would see half of world’s population growth in next 30 years but is running out of food.

How is India expected to feel when despite being the second most populous nation; an economy and military which is more powerful that France or UK, still put on margins at UN global headquarters?

Or China which has 17.7 percent of the world’s total wealth, assets of $40 trillion, more billionaires than even the US yet is vilified at global forums and surrounded by military bases? When its’ spend on military is minuscule compared to the US ($293 billion to $801 billion) ?

So niceties could wait.

India and China, despite Western sanctions, are ramping up buy of Russian oil: India’s crude buy has jumped from 1% to 18% since Russia’s military operation in Ukraine in February. Today, Russia is India’s second bigger oil importer after Iraq.

If Russia is producing 3.55 billion barrels of oil a day, about 50% of its headed for Asia, mainly to India and China—up by 40% since the Ukraine Crisis erupted.

India and China see a virtue if a BRICS Plus takes shape in coming years: As it is, the grouping has a combined population of 3.23 billion and a combined GDP of more than $23 trillion.

It’s combined trade is jumping by 33.4 percent on a yearly basis.

Together, the BRICS nations account for 18% of trade in goods and 25% of foreign global investment.

And some of them are significant even if our own worldview is limited by the Western blinkers: Kazakhstan is the biggest in Central Asia; Senegal currently chairs African Union; Thailand the one of APEC and Indonesia presently of G20.

The New Development Bank (NDB) the BRICS floated in 2015, has now admitted Bangladesh, the UAE, Uruguay and Egypt. Its footprints have expanded with an office in Gujarat which has approved 21 Indian projects worth $7.1 billion. It is overseeing some 80 projects worth $ 30 billion around the world.

This is a vision spanning Global South integration: Eurasia, Africa and Latin America all see a virtue in not putting their eggs in the Dollar basket. It could have other important blocs such as Gulf Cooperation Council (GCC) and Eurasian Economic Union (EAEU) in it’s embrace.

The truth is: West is not World—and the latter is trying to break free of the shackles imposed by the former.

They want to have their own say on their lives, their destiny.

They fear today to have their assets in a currency which is subject to whims of its issuer.

They have seen how Covid or a Ukraine could roil their economies and supply chains without a sweat on the brows of West.

Today it is Ukraine, tomorrow it would be some other country where a proxy war would be staged; unmindful if the rest of the world and billions of people go out of job and without food.