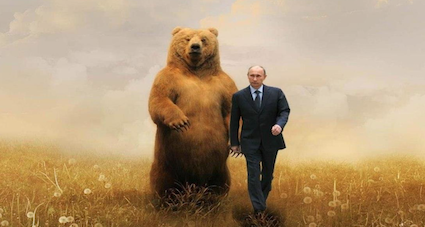 An average Indian first drew to the Ukraine crisis after the bloodbath on the Dalal Street made headlines this morning. I suggest you better be tuned in for we are approaching a cataclysmic moment in world history.

We are told that West and East have squared up for a confrontation which could be bigger than both the World Wars.

The West—The United States and its West European allies—have anti-missile launch pads in Poland and Bulgaria; and Ukraine is being suffused with weapon and funds.

The East, in the form of Russia, feels it is being encircled, and not just want West to back off, it also wants the US to respond to its demand in writing.

If the US doesn’t sign the two draft treaties Russia sent in December last, Moscow is promising “military-technical” action.

This is what was said by Yevgeny Fyodorov, Russian state Duma deputy: “Russia plans to use its nuclear weapons not against the countries where they were launched against Russia, but against the master cities where the decisions were made. To be exact, these are Washington, New York, Los Angeles, Chicago and other American cities.

“If the US nuclear weapons are launched from, say, Taiwan or Poland, the response will hit New York or Washington.”

What exactly are these two treaties-in-drafts on which Russia is seeking US’ compliance?

One, that the US-NATO would withdraw offensive weapons from Russia’s immediate vicinity;

Two, NATO would withdraw to its 1997 position in non-NATO countries—“Not an Inch to East”, as it had promised.

If you decline, Russia has warned, the United States and NATO must put in writing their refusal to accept security guarantees.

If the United States go back on agreements to which it is a signatory, including international collective security (OCSE) they would be apostates from international law and order.

The US would effectively be saying that principle of collective security is null and void.

Any neighbouring country, say Cuba, would then be free to offer launch pads to Russia’s nuclear weapons and Florida and Miami would be the first targets.

If the US agree, they would have to retrace its steps, as well as NATO’s.

It would make the world unipolar with China-Russia axis taking over Eurasia and taking a giant step towards control of Africa.

If the United States want to control Middle East, it needs Europe.

If it wants to be a player in Central Asia, it needs Middle East.

It created the Ukraine Crisis for two primary reasons.

One, if Russia backs out and ignores its security in vicinity, Vladimir Putin would be as good as gone in 2024 general polls.

If Russia doesn’t back out, the US could take aggressive measures which would nail Russia and weaken China in turn.

All this was sound logic but the United States hadn’t bargained for Russia turning the tables.

Russia knows it doesn’t need to fear Ukraine or the support it has in its back from the West.

If Ukraine looks to reclaim its erstwhile region Donbass, Russia doesn’t need to invade it—its’ long artillery from its own border would suffice to quell the advance.

The state of Ukraine, as we know it, would be over.

If the West triggers a full-scale war, NATO would be engaged in Eastern Europe and Middle East would be up for grabs for China.

If West blinks eye, NATO could be de-engaged for Middle East but Russia would’ve buried the perception of US hegemony.

The world would wonder if Washington is more coward than stupid.

The United State could revert to its “sanctions” game but the tool which has had no effect on Russia since 2014, is unlikely to matter much now.

Instead, the oil prices would soar and the US markets would crash.

Russia’s counter would make US-EU unity crumble within days as electorates in Europe would bay for blood of their political masters.

If Russia wanted to invade Ukraine, it could’ve done so many a times since 2014.

It’s forces are at Ukraine border not from today.

But Russia is now playing the hardball and asking West to provide it with security guarantees—failing which Russia would act, possibly make a lesson out of Ukraine or deploy its own nuclear weapons in neighbourhood of the United States.

Caught in a cleft, the United States most likely would cook up an excuse as it would withdraw from Poland and scale back on Ukraine.

In order to avoid its humiliation, it would cook up some “event” with the support of shameless Western media so that citizens of the world remain deluded and are not witness to its naked infamy.

It could be some catastrophic mutant of pandemic; or an artificial shortage of natural gas causing a humanitarian crisis.

Keep eyes wide open folks: We are seeing the unravelling of world’s superpower as we have known the US to be.