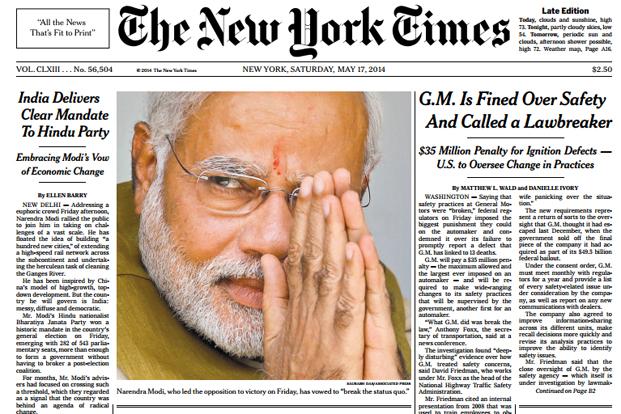 Who’s afraid of Western media? Certainly not Modi’s India. The telltale signs of recent times convey a stunning departure from India of old when every censure from a New York Times or British Broadcasting Corporation (BBC) sent a chill down the government corridors of New Delhi.

Now an extremely well-networked Western journalist Aatish Taseer, who writes for Time, Sunday Times, Sunday Telegraph, has his OCI (Overseas Citizenship of India) card revoked by New Delhi for concealing his parentage and despite a personal written appeal by 260 celebrated men of letters, including Salman Rushdie, to the Indian prime minister, it hasn’t elicited a word in response from Narendra Modi.

It’s nearing four months since the political heavyweights of Jammu and Kashmir were put under house arrest by the Modi government after it abrogated the “special status” of state of Jammu and Kashmir and broke it into three separate territories. Despite the din and orchestrated campaign in Western media, the Modi government hasn’t bothered to put a timeline on their release.

In the altered reality of our times, the gravity of the world has shifted to Asia where India along with China, and Russia, have popular leaders in control of the destiny of their countries. Nationalism is at the heart of their policy which by its very definition runs counter to the liberal narrative of the Western media.

Western media isn’t just about the United States or the United Kingdom—it by and large represents most West European countries and comes in a language-bouquet of English, French, German, Spanish, Italian etc. Western media is the foot soldiers of West in winning the public perception in latter’s favour. It has a veneer of independence but actually is an extension of the liberal establishment which acquired hegemony after World War II.  West detests any assertion of sovereignty and nationalism and so does its media. Brexit is a case in point.

The evidence too is hard to ignore. The Economist openly urged Indian voters to vote for Congress and not Modi’s BJP in both 2014 and 2019 elections. Yet voters overwhelmingly voted for BJP. The Guardian bemoaned Modi’s win as “India’s soul lost to a dark politics.” The New York Times found India to be suffering from Modi’s “raw wisdom.”  Washington Post believed Modi won because “India had no credible alternative.” All through, the Western media narrative has been the demonization of Modi, on the “divisive” politics of beef and “lynchings” of Muslims. Yet it made little dent to Modi’s popularity.

Modi’s India thus sees no benefit in trying to cultivate a network which is fundamentally in conflict with their sovereignty. It relies on its strong domestic base which won them a second successive term with full majority this summer. As an economy which could be third largest in coming years, it knows it’s attractive to the world’s largest corporations and business. It received its largest Foreign Direct Investment (FDI) ever this financial year. India now ranks very high in the Ease of Doing Business rankings too. It’s also aware that millions of Hindus, quite a few well-heeled and a force in Western capitals of New York and London, are quick to pick up the cudgels against orchestrated campaigns.

India appears to have hedged its bets well. The two strongest cards West and its’ media plays are “human rights” and “democracy.” West uses these two weapons to wreak havoc in countries as diverse as Iran, Iraq, Afghanistan are from Bolivia, Chile and Cuba. Sometimes there are direct military interventions overriding international laws; on other occasions, there are suffocating economic sanctions; at other times it’s stage-managed internal eruptions as have been witnessed in Ukraine, the Middle East and now Hong Kong.

India bets against such a scenario because it’s not only economically attractive to the West but also  Donald Trump’s United States hopes to ride on its shoulders for its’ Act Asia policy.  Internal eruptions are a powerful tool which the United States has perfected over the years. But India is assured it won’t happen to them in the near future, at least till the 2020 US presidential elections are over, a year from now. Without an active US intervention, New Delhi’s streets won’t be filled with demonstrators as it’s happening in Hong Kong or Bolivia. Modi knows well within he could ignore the barking dogs.