Why do you think Arvind Kejriwal is missing in the Hall of Dirty Dozen? 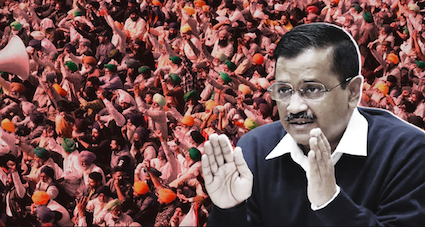 The biggest threat to Indians’ lives in Covid-19 pandemic are protesting farmers but these are not the only rogues.

With tens of thousands of farmers marching towards Delhi’s borders, and a call for nationwide protest on May 26, the super-spreader would only stoke the fire to the blazing flames of the 2nd Wave of the pandemic.

Punjab chief minister Capt Amarinder Singh has gone on his knees in appeal against, urging farmers’ union not to act irresponsibly and endanger the lives of their own people with such reckless behaviour, more so when there is a complete ban in the state on all gatherings under the present lockdown.

Amarinder’s own Congress party chief, Sonia Gandhi, though has signed a letter of support  to the farmers’ congregation on May 26, terming it a “heroic peaceful Kisan struggle.”

There is no prize for guessing other leaders signatories to this letter, shedding copious tears on vaccines, oxygens and hospital beds in media, bristling with anger on Kumbh Mela but worsening India’s tragedy by encouraging a super-spreader event of protesting farmers.

The notable omission of Delhi chief minister Arvind Kejriwal is understandable given this pandemic has all but snuffed the life out of his political career and by signing the letter, he would’ve put the epitaph on his own political grave.

This is as tacit an admission as you would ever get from Kejriwal that the protesting farmers arguably are the super-spreader of 2nd Wave in India and everything, be it data, clusters, sequence of spread points towards their culpability.

We have no less than a minister in the Captain Amarinder Singh cabinet—Tript Rajinder Singh Bajwa– admitting on national channel that the rise in Covid-19 cases in Punjab are linked to the protesting farmers.

Haryana has already written to the Centre that over the last one month, 129 people died of Covid-19 in its villages from where farmers in large numbers have been turning out at Kundli and Tikri borders.

We don’t need the miserable state of Punjab in present crisis—around 10,000 cases daily, not to speak of 200 daily deaths—to link the dots. Covid-19 deaths are now being reported from the protesting sites at Delhis borders.

We would only be blind to believe that protesting farmers coming in batches from Punjab villages are not spreading the virus amongst their own or community. There is now ample evidence that 58% of the deaths being reported in Punjab are from rural areas.

It’s an easy deduction that when the Punjab state government is giving Rs 5 lakhs as compensation to the farmers who die because of the ongoing protest, the grievers are afraid to admit Covid-19 deaths, lest they lose out on the monetary compensation.

But who could bell the cat?

Governments, be it Centre of States, are afraid to wield the whip and play into the hands of protesting farmers who are backed by a global lobby. The governments know that’s what protesting farmers are praying for as it would bring the movement back from the dead.

The Judiciary, so sanguine the other day about why not Election Commission be slapped with “murder” charge for holding elections, wouldn’t ask for guillotine for itself. After all, nothing came out of the petition for “removal” of farmers as it was causing the “spread of Covid-19 pandemic,” a good six months ago.

We also don’t know the verdict of the “committee” to look into the three farm laws. It was appointed by the Supreme Court, its understandably been submitted to the apex court but the citizens of the country have no right to know where we stand on the impasse.

Lutyens Media? May the worst curse fall upon them for they have been crying hoarse on Kumbh Mela and election rallies as super-spreaders but haven’t even whimpered on protesting farmers. They are crooks of the worst kind, vultures who feed on dead, traitors of the very land which is their identity.

De Kock and Mohd Shami: Race and Religion which must fit our individual lives

Let’s say Quinton de Kock is talking. He didn’t take a knee because a majority of Whites in South Africa, half a million, are dispossessed....