Why is India exporting vaccines? Why World and not India First? 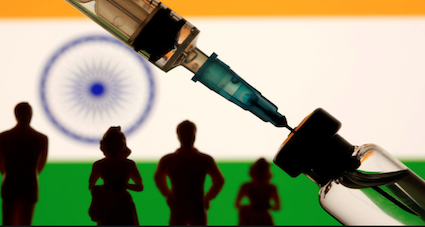 All those who swoon on West pay attention. Think before you praise their leaders and their moral compass. That seductive LivesFirst or #BlackLivesMatter which has seized your imagination.

You would remember Adar Poonawalla of Serum Institute had requested the US president Joe Biden to lift restrictions on important ingredients into manufacturing of Covishield vaccine which they are doing on behalf of AstraZeneca. It’s hampering Serum’s legal commitment to its producers and affecting its production and supply to India and worldwide. Serum had promised a supply of a billion doses per year. They face a legal suit in coming up short from AstraZeneca.

So here we are. A typical vaccine manufacturing plant needs around 9,000 different materials, according to a report by the World Trade Organization (WTO). These materials are provided by 300 suppliers across 30 countries.  A few essentials are filters and cell culture media (details here). Europe manufactures most of such ingredients/materials. But the producers or owners mostly are US-based companies.

Joe Biden, no sooner he had come to office, invoked the US Defense Production Act. This empowers the President to order domestic businesses to put America First. So priority for essential ingredients is for Pfizer and BioNTech vaccines etc. Biden has now said it’s to ensure 24×7 manufacturing of one-shot Johnson & Johnson vaccine too.

On the face of it, no questions. America is for Americans first. That’s what a government takes oath on Inauguration Day. But how do you explain that the United States also doesn’t want the world to make generic vaccines out of the ones it is making?

If the patents go, in this dire moment for humanity, Millions of lives in poor world could be saved. 1% or 99% of humanity? Profits or humanity? Is there even a choice?

But the United States doesn’t want the Patents to go. It’s not telling Pfizer and Moderna vaccine manufacturers that lesser profits won’t hurt. That the 100 billion dollars business it’s eyeing from its vaccines could be forsaken for lesser profits. That selling your vaccines at $25-$35 first in US, and thereafter hiked further for families devastated from this pandemic around the world, would be sin in the eyes of Holy Christ. That US need to live up to its motto: Till Everyone Is Safe, Nobody Is Safe.

But the United States is adamant. It’s not listening to India and 65 poor countries which want such restriction on patents to go. The clamour around the globe is increasing. But they don’t reach the ears of moneybags in the West. And they don’t reach your eyes courtesy Media which is handmaiden to these Fat Cats.

India and the rest of the world is hoping that the in the June meeting of the World Trade Organization (WTO) they could prevail. India has asked its embassies around the globe to canvas support from the host governments so that the hands of US could be forced. So that these 60-odd nations cold grow into a two-third majority when the vote is cast. So that patents restrictions goes. So that humanity survives. Never mind if the Fat Cats is purring and sulking.

Why The Hell Is Then India Exporting?

Now, it’s logical you question why did India export millions of vaccines around the globe, and is still doing, when its own billion people are gasping for breath. This Vaccine Diplomacy to what end?

The answer is simple but your newspaper won’t tell it to you. And it is that Serum is just a manufacturer. It doesn’t own Covishield vaccines. That it’s legally-bound to supply manufactured vaccines, time-bound, to countries with which AstraZeneca has a contract in place. That if Zeneca is hauled to court for defaulting its promise to nations, it would be left with no choice to make sure Serum goes bust.

You would say: Okay, we understand Serum is legally-bound. But why the Modi government? Why its’ sharing its quota of vaccines with the rest of the globe? Why not prioritize Indians, like Americans are doing?

The simple answer is, India needs ingredients from abroad. You can’t take ingredients and say we won’t give you vaccines in return in gesture. What if they too ban export of these ingredients. Besides, you need their support when you want the hands of West to be forced on global forums such as WTO.

It’s not US alone. At least 50% of the required buffers and enzymes, for instance, are imported largely from Western countries such as France, Germany, Switzerland and Italy. Products such as thimerosal, used as a preservative in multi-does vaccines, and beta propiolactone, used for inactivating viruses, are mainly imported from Germany.

So next time you fret when the British Parliament raises Human Rights issues and it’s a screaming headline in Indian Express, pause. When Global Democracy Index shows India behind Mali, pause. When US Congress deliberates on Religious Freedom in India, pause. The welfare of humanity is farthest from their mind.

Like Pfizer donated millions to Biden, big businesses control the world. Roles are crystal clear: Talk big; amplify through media; but in the end, Only Profits Matter.

So Cut The Crap Out!