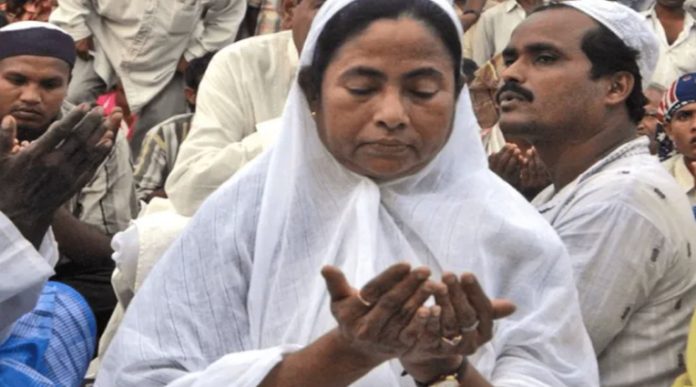 West Bengal politics is again is in the grips of slogans. While West Bengal CM Mamata Banerjee is hypersensitized by ‘Jai Shree Ram’ slogan, she and her followers sloganeer ‘Jai Bangla’ in spite of ‘Jai Bangla’ being the National Slogan of Bangladesh. West Bengal CM hailed Bangladesh even on the platform of Netaji Jayanti Celebration at Victoria Memorial, Kolkata, on January 23 even as Bangladesh doesn’t have Netaji as one of its national heroes. Never mind that Netaji worked for the undivided India and Undivided Bengal. Yet Mamata preferred a slogan which resonated more with Bangladesh than with the rest of “Bharatvarsha.”

We all know the Mamata didn’t deliver a speech on Netaji Jayanti celebrations at Victoria Memorial, apparently irked by the “Jai Shri Ram” voices emerging from the attendants. She claimed that BJP raised its political slogans at a government programme which disturbed her. But lest it be construed as an insult to Netaji, she is promising to spend hundred crores on a Netaji statue.

There were two other slogans raised besides “Jai Shri Ram.” One was “Bharat Mata ki Jai” and other “Jai Hind.” But it’s “Jai Shri Ram” which upset Mamata no end. Why it upsets Mamata so much? After all “ Jai Shri Ram” is an acknowledged greeting among Indians. It’s also kind of social-political-cultural identity of our land.

The truth is there has been a consistent effort to run down Shri Ram in West Bengal for decades. Communists set about it and Mamata Banerjee has only become more vigorous on it. In the last 10 years, Raghuveer Shri Ramchandra has been described as a nomadic character in Class VI text book of government schools. The book describes the word ‘Ram’ in Sanskrit to mean ‘Roaming’ and falsely claims that the Sanskrit word ‘Ram’ has evolved from the English word ‘Roaming’ since both mean the same— wandering. The History Text Book of Class VI, titled “Otit O Oitihyo” (Past and Heritage) vilifies Ram without mentioning any scholarly reference of Valmiki Ramayana. But why vituperation of Shri Ram in West Bengal? The answer lies in the history of the state.

The historical perspective of West Bengal’s creation lies in the original plan of Muslim League to include Undivided Bengal province in the then East Pakistan during Partition of Undivided India in 1947. Undivided Bengal then was an interesting place with 41.20% Hindus & 55.65% Muslims during 1941 Census & 42.38% Hindus & 56.48% Muslims during the 1951 Census. A concerted effort of Dr Syamaprasad Mookerjee along with other eminent personalities of Bengal created West Bengal as a state of India for Hindus of Bengal. West Bengal was included in India as it was impossible for Hindu Bengali to exist as a clan and culture on an Islamic land.

However, the Muslim League was politically furious to lose a part of Undivided Bengal. Capturing Kolkata was their prime target. Muhammad Ali Jinnah fondly desired to include the second most prosperous city of the then British Empire in Pakistan. Moreover, Jawaharlal Nehru too didn’t mind to hand whole of Bengal over to Pakistan and so wanted the Britishers too. (Why Nehru and Britishers wanted so are two separate issues.) Hence, though West Bengal was created as a Hindu Homeland for Hindu Bengalis, Muslim League always had an eye on this State. They kept on dreaming to capture West Bengal ‘by hook or by crook’.

Muslim League descendants set vicious pact with West Bengal’s state legislature. Pact-setting was hassle-free as West Bengal got infested by Communism from the early 60s. Communist Party of India vociferously argued in favour of Islamic Pakistan as a prime prerequisite for India’s Freedom. Indian Communists’ favouritism for Muslim League, hence, is no fiction. Islamists kept on entering West Bengal from Bangladesh through 2216.7 Km long West Bengal-Bangladesh border and Communists in West Bengal kept a blind eye. Thus began the silent demographic change of Hindu homeland in West Bengal. Steady infiltration of Islamists from across border was a guerrilla tactics of Muslim League descendants. Sri Ram, simply, is an antidote to radical Islamic monoculture.

Shri Ram is also an icon of immense physical strength, heroism and gallantry. But the rulers of this state would rather have common man dispossessed of these qualities. A strong society would be an obstacle to Islamic hold. In February 2018,  West Bengal’s education minister Partha Chatterjee stated that Lathikhela as physical education won’t be allowed in West Bengal schools. He termed Lathikhela as ‘religious fanaticism’. Communists too discouraged Bengali tradition of Kushti, Lathikhela and physical fitness. Why? Perhaps to make common Bengali men necessarily feeble & timid. The same tradition is repeated by Mamata Banerjee’s legislature too.

Today, Muslim league descendants are needed for votes and control of state. The more the merrier even if they have to be “exported” from across the border. That’s how you could have an Undivided Bengal under your grip. This agenda has been in works for last six decades. The Bengali bhadralok has been hypnotized. They can’t see the imminent danger of radical Islam’s takeover of Bengal. The Bengali language has got disfigured by reckless insertion of Arabic and Urdu words in Bengali vocabulary.

It would be relevant to remind readers about the recent event of October 2018 where Imams’ Association of West Bengal wanted a Muslim Police Commissioner in Kolkata and a 100% rise in Imams’ allowances. During Covid pandemic, Imams didn’t want lockdown to hamper Eid-ul-Fitr or Bakri Eid. They pushed the agenda through letters to the chief minister and getting the press to amplify it.

In practice, West Bengal thus has turned into a Clergy-controlled State in Banerjee era. Imams dared as they complemented Banerjee by creating a winning vote bank for her. Hence, it is Banerjee’s accountability to this patron lobby that compels her to display irritability towards ‘Jai Shri Ram’. Ramji and Radical Islam belong to different ideological paradigms and cannot exist together. ‘Jai Shri Ram’ is a slogan for people-centric Ramarajya. However, those who patronize Clergy-controlled, indoctrination-oriented “Khilafat” cannot hail Shri Ramchandra.

(This article was first published in the Organiser. This is an abridged version).