With armed forces on ground, BJP awaits Mamata’s next move in Bengal 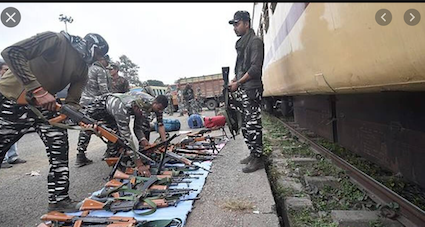 On the political chessboard of West Bengal, the next move belongs to Mamata Banerjee and her ruling party, Trinamool Congress.

The Centre has been very astute in moving its pieces on the chessboard by making a successful appeal to Election Commission to deploy Central Armed Police Force (CAPF) which would number 42 companies before this Sunday is out and in total 125 Units before this week is out.

First let the enormity of this move sink in. Each company involves 100 personnel so we have this situation of 1.25 lakh highly-trained soldiers—combating terrorists and naxals and being used on issues of both external and internal security—being pressed into service. Why, the first 12 companies which arrived on Saturday came straight from Jammu and Kashmir!

Now look at the pattern. Two companies of the Central forces reached Durgapur by train, one company at Bardhaman station and five companies at Dankuni. Their destination is Purba and Paschim Medinpur, Hooghly, Paschim and Purba Bardhaman and Birbhum districts, Bidhannagar, Barrackpore, Diamond Harbour, Durgapur and Howrah police commissionerate and Howrah rural districts.

Now Bengal has 23 districts and there are at least 100 of the 294 assembly seats which fall close to or not too distant to 2,217km-long border West Bengal shares with Bangladesh. As I have been reporting in these columns (here and here and here), these are ripe zones for smuggling of all kind, including cattle but the biggest concern remains the massive infiltration from Bangladesh in recent years.

Refugees and Infiltrators: The dividing line

This exodus from the neighbouring nation of course involves both Hindus and Muslims but there is a difference. Hindus largely come out of fear of persecution in an Islamic state; Muslims come largely for material gains. These material gains are bountiful since they are extremely useful for political parties in terms of votes and there is a quid pro quo involved. But make no mistake—their status is of infiltrators, different from refugees which have been recognised as fleeing Bengali Hindus and have been granted citizenship rights under the Citizenship Amendment Act (CAA) 2019 if they have came over before December 31, 2014.

Now it remains in ruling Trinamool Congress interest that these refugees/infiltrators remain malleable to their Rods and Rewards. Refugees came looking for citizenship which has not come their way (blame it on Nehru-Liaquat Pact) while infiltrators never looked for citizenship and yet have “acquired” it through political machinations and could vote (even in dead people’s name) and spread themselves within the state or elsewhere.

It doesn’t require intelligence to fathom that Bengal Hindus—referred to Matuas in local parlance—would prefer Citizenship Amendment Act. It would legitimize their decades of refugees-existence into lawful citizenry. They could vote, reap State and Central schemes benefits, secure jobs and ensure the same for their next generation.

The infiltrators on other hand don’t seek citizenship yet are happy with the arrangement for they could vote and practically have everything which a citizen gets his or her way. The West Bengal government has several schemes which benefit them by way of subsidies, scholarships and stipends (such as thousands of rupees to Imams and Muezzins) and they would be more than happy to oblige with their votes in return. Besides, there is this matter of Islamist terrorist who take advantage of this open invitation and are a threat to national security,  not to say of possible secession in coming decades. That Mamata Banerjee evokes “Jai Bangla” in her exhortations—which is a slogan of Bangladesh—should leave no one in doubt who her target audience is.

So CAA is the catalyst. Bengali Hindus of Bangladesh would go for it. Bengali Muslims of the neighbouring nation would view it as a death-knell. BJP is promising CAA once the Covid-19 vaccination drive is over. Mamata’s Trinamool is egging them to first declare the rules of CAA thereof.

If BJP doesn’t declare the CAA Rules before the assembly elections, Mamata could claim to Matuas that the Centre is making a bogus promise. (Hasn’t Mamata been saying repeatedly: CAA hobe na, NPR hobe na, NRC hobe na?) If it does declare the CAA Rules, it could help Mamata launch an anti-CAA stir which undoubtedly would receive an echo in like-minded states such as Kerala and BJP would be pinned in a corner.

CAA would also leave the Bengali Muslims infiltrators “vulnerable” in their own perception. Thereafter, they could be reported for suspicious activities. They would want a retribution, and strident support from Trinamool Congress and its ministers to stir up trouble in the State, more so in districts where they are majority in number.

CAPF in Bengal: A game changer

Now the deployment of CAPF, which is made up of five such arms of Government of India—BSF, CRPF, CISF,  ITBP and SSB—is a game changer. It would be spread to every district, every nook and corner of the state, more so in troubled areas. It would leave little room to unleash political violence. The State police would’ve little leeway. We already know from Bihar elections that police personnel can’t be deployed in the area where they serve as a registered voter.

Further, the BJP has demanded that contractual staff not be permitted at district level as Group D staff. This staff works as polling officers but interestingly are not answerable for their conduct since they are not regular government employees. In short, they could subvert assembly polls. In case of shortage, the BJP has pleaded, the Election Commission may requisition polling officers from neighbouring states to ensure fair and free polls.

A few takeaways are apparent: One, the Election Commission is convinced that law and order would be a burning problem in West Bengal from the campaigning stage itself. It has taken the unprecedented step of invoking CAPF even before the poll dates are announced. Never before too has CAPF been extended to all districts of a State. Coordination and monitoring of the central forces would be done by team comprising of Chief Electoral Officer,(CEO) Additional Director General (law and order), nodal officer of the state police and DIG (BSF) nodal officer for the CAPF.  The security forces would send daily reports to the CEO by 8 pm. The CAPF would patrol their area of influence in night too.

Two, the Election Commission doesn’t think that the State government of West Bengal would be neutral from now on till the assembly polls. It has seen how violence has dominated the elections in Bengal, even at Panchayat level, and how it affects the voters turn-out, not to say the coercion they face.

Violence is a big card in West Bengal. Even as I write this, during the Paribortan Rally of BJP in Basirhat, North 24 Parganas, violence erupted at a disturbingly high scale. BJP has claimed that it was Trinamool Congress’ goons who air-fired, threw non-stop bombs as well as bricks, injuring its cadre and innocent people, some of them critical now, and damaged several vehicles. Media has captured it on camera. BJP has given a written complain to Election Commission on the matter.

What could Mamata do from now onwards? Her slogan for assembly poll is Vote for Own Daughter. Surely, Trinamool Congress’ efforts would be directed to show BJP as outsiders, as those who know little of Bengal or its ethos. But its spine is the support of minorities for whom the appeasement in the State has shown no limit. Another card is to browbeat supporters of BJP into submission. If CAA comes into effect, or looks tangible to Matuas, and if CAPF does its job, Didi would find her wings clipped.

What next? Mamata’s next move could decide the trajectory of assembly elections.

And it’s coming within next few hours.