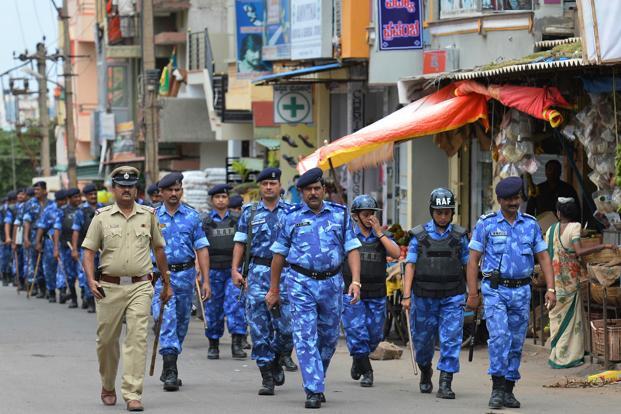 The political storm is all set to brew up with the centre’s decision to deploy additional companies of paramilitary forces to West Bengal, after reports of violence by the workers of TMC in the first and second rounds of polling on April 11 and 18 in two and three constituencies respectively.

Ajay V Nayak, special observer of Election Commission, opined that the situation in West Bengal is akin to what it was in Bihar during Lalu Yadav’s regime when a heavy deployment of central forces was required to conduct free and fair polls.

On April 11, Cooch Behar and Alipurduar constituencies went to the polls, followed by Jalpaiguri, Darjeeling and Raigunj on April 18. On both the days of voting, reports of hooliganism, violence and intimidation of voters was reported.  At Kataphulbari in Raigunj constituency, a reporter and a camera person were manhandled while covering violence of TMC goons, while in Chopra ,voters blocked the roads complaining about the absence of forces in the polling booths in the area. A local, Sujit Kumar alleged that their voter cards were snatched by TMC miscreants.

Mohammed Salim, the incumbent MP from Raigunj claimed, “I got to know of rigging inside this booth. After I reached the polling station, some people attacked my car. Though I am unhurt, the vehicle has been damaged. I believe the ruling TMC is behind the incident,”

The Centre rushed an additional 50 companies (each company comprising around 150 soldiers) of paramilitary forces to West Bengal, increasing the total number of paramilitary forces in the state went up to 330 companies. Senior government officials in New Delhi expressed concern over the violence in West Bengal, on the condition of anonymity explained “Despite best efforts, deployment of troops is often delayed by pliant state-government officials and local police officials.”

The allegations of violence against TMC is not leveled by BJP only, but by CPI(M) also, one who have offered a friendly seat to Rahul Gandhi in Wayanad.  With the significant deployment of central forces, covering 85% to 90% of polling booths, the idea is to nullify, or at least minimize the complaints of intimidation, booth attacks, looting of EVMs as was witnessed during 2016 assembly polls in Bengal.

Ajay V Nayak, a 1984-batch IAS officer of the Bihar cadre who was recently sent to the state to oversee the last five phases of polling, said, “The condition in West Bengal is quite similar to what it was in Bihar around 10 to 15 years ago. During that time in Bihar, total deployment of Central forces at the booths was required. Now it is required in West Bengal as the people of West Bengal have lost faith in the state police…”