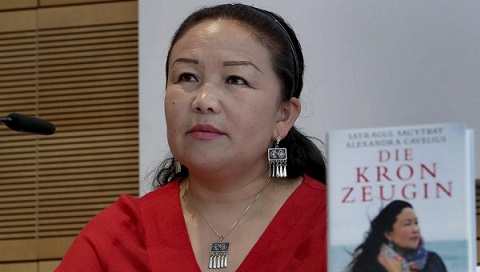 Sayragul Sauytbay, a Kazakh Chinese doctor who fled from, what is called re-education camp in China, wrote the book ‘The Chief Witness’ describing her ordeal in those camps in  China for being a minority Muslim.

In an interview with Al Jazeera, she talked about the hardships and on other indignities to which the Uighur Muslim minorities were subjected to, including the consumption of pork, a meat that is strictly prohibited in Islam.

Sayragul Sautbay, the recipient of ‘International Women of Courage Award’, in March 2020 escaped China and after her appeal for asylum  in Kazakhstan was not entertained, Sweden offered her political asylum.

She says It has been two years since she was released from a re-education camp, she still suffers from nightmares and flashbacks from the “humiliation and violence” she endured while she was detained.

“Every Friday, we were forced to eat pork meat,” Sautbay said. “They have intentionally chosen a day that is holy for the Muslims. And if you reject it, you would get a harsh punishment.”

She added, “the policy was designed to inflict shame and guilt on the Muslim detainees and that it was “difficult to explain in words” the emotions she had every time she ate the meat. I was feeling like I was a different person. All around me got dark. It was really difficult to accept,” she said.

Another witness of Chinese atrocities is Zumret Dawut, who now lives in exile in the US. She was detained for two months in her hometown of Urumqi and was repeatedly forced to eat pork while in detention. She recalls that for two months, Dawut said authorities demanded explanations about her links to Pakistan, how many children she had  studied religion and read the Quran. She said she was once slapped by her interrogator and repeatedly served pork.

“When you sit in a concentration camp, you do not decide whether to eat, or not to eat. To be alive, we had to eat the meat served to us,” she told Al Jazeera through an interpreter.

She and several other female detainees were sterilised to prevent them from having more children. The controversy was reported earlier this year by the Associated Press news agency, drawing widespread condemnation.

Dawut alleged that the Xinjiang government’s initiative for “free food” for Muslim children in kindergarten was an undercover mission of making Muslim children easy pork.

Last year, the Italy-based AsiaNews alleged that during the Chinese Lunar New Year, which happened to be the “Year of the Pig”, government officials reportedly delivered pork directly to Muslim households in Ili.

The re-education camps is like Jews’ ghettos  in Nazi Germany.. The Chinese Communist Party want to redefine the cultural and religious beliefs of  Muslim minority.

The surveillance on Muslims has reached a proportion where they are being viewed as potential Islamic fundamentalists, thereby justifying a network of camps as necessary to counter “extremism”.

Al Jazeera claims to have documents that show that agricultural development has also become part of what German anthropologist and Uighur scholar, Adrian Zenz says is a policy of “secularisation”.   Zenz claims that the documents and state-approved news articles reveal that there is an “active” effort to promote and expand pig farming in the region.

In November 2019, Xinjiang’s top administrator, Shohrat Zakir, that the autonomous region would be turned into a “pig-raising hub”; a move that Uighurs say is an affront to their way of life. He claims a new farm in the southern Kashgar area is being developed which aims to produce 40000 pigs every year.

The project is expected to occupy an area in an industrial park in Kashgar’s Konaxahar county, renamed Shufu, according to the Chinese-language website, Sina.

The Muslim minorities in Xinjiang say that this amounts to the cultural cleansing as the Chinese Communist government is trying to erase their cultural and religious traditions. “This is part of the attempt to completely eradicate the culture and religion of the people in Xinjiang,” Zenz told Al Jazeera. He continued, “It is part of the strategy of secularisation, of turning the Uighurs secular and indoctrinating them to follow the communist party and become agnostic or atheist,” he added.

However, Beijing has defended its policies in the region, saying the approach is needed to fight the “three evils of extremism, separatism and terrorism”, so intertwined in Islamic traditions.  The result is that Chinese Communist Party has denied any existence re-education camps, where, United Nations say more that one million Uighurs are held. Rather, instead the CCP terms them as centres for upgrading skills.

According to the Australian Strategic Policy Institute in September, there are at least 380 re-education camps and detention centres in Xinjiang.

Ironically, in India, those who are upset at the treatment of Muslims at the hands of majoritarian Hindu nationalist government, and seek support of China like Farooq Abdullah does, won’t bat an eyelid on the treatment being meted out to fellow Muslims in Xinjiang.

Perhaps Indian Muslims should ask their state governments in Bengal and Kerala, which go ito poll in next few months, what’s their view on China on the matter. The cat would be truly out of the bag.