Didi’s model in West Bengal is for infiltrators, says Modi 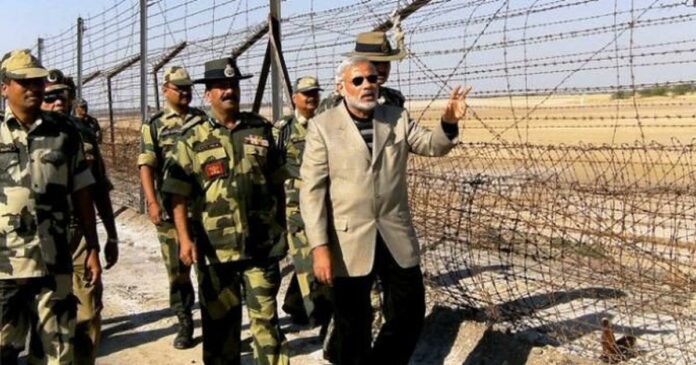 Taking the fight at the doorsteps of Trinamool Congress leader and chief minister Mamata Banerjee, Prime Minister Narendra Modi, addressing a jam-packed  rally at Asansol, West Bengal charged Mamata to be in cahoots with scamsters, goons, infiltrators and enemies of the nation.

Running down Mamata’s development model, Modi pronounced, “Didi’s development mode is based on Coal mafia, iron mafia, land mafia. Her model is for the infiltrators, letting them in and then loot the limited resources of Bengal, which I will not let happen.” He accused Mamata for first letting illegal infiltrators in and then calls to Bangladeshi actors to campaign for her. It may be recalled Bangladeshi actors Ghazi Abdul Noor and Ferdous Ahmed were barred from campaigning for TMC candidates and were ordered to leave the country by MHA.

In view of recent blasts in Lanka and with Islamic State (IS) owning responsibility, the threat to India is real if infiltrators are allowed in with impunity. It could seriously harm communal harmony and put the security of country at risk.

Modi, starting the speech with his customary ‘Vande Mataram’ call and stirring an emotional chord with the local populace by addressing opening lines in Bengali, lost no time to launch a scathing attack on Bengal CM by blaming her for hijacking the democracy  in the state. “TMC, which hijacks democracy, people have made up their mind to punish them and time has come”, he thundered. He blamed the CM for instigating her party’s workers to attack central forces and create violent obstructions in the conduct of free and fair polls in Bengal.

Nicknaming Mamata as “Speedbreaker Didi”, he accused Mamata Banerjee of abusing him on a daily basis and said that frustration of Mamata is evident when she keeps on blaming Election Commission. He declared “Jo bhrasht hai, ussiko modi se kasht hai,”(whosoever is corrupt is upset with Modi).  He continued, “Trinamool is in competition with pre-2004 Congress as far as corruption is concerned.” Touching the scams like Narada, Sarada Ponzi and Rose Valley scandal, Modi mocked Mamata for fighting only a handful of seats and yet dreaming of becoming the prime minister of the country, adding she would not be able to use the tainted money as bargaining power. “Prime Ministership is not for sale, Didi,” he lashed out amidst cheers in his support. “There is a difference between ID and IED (Improvised explosive devices).”

The periodic eruption of ‘Modi- Modi’ by the assembled public and continuous waving of flags was enough a signal to the BJP leadership, on the stage and also nationally, that the party has already made deep inroads in Bengal.

In January, Mamata Banerjee hosted an all-India anti-Modi rally in Kolkata which included Congress’s Mallikarujan Kharge, Farooq Abdullah, ex-PM Deve Gowda  et al. Charging the assault, Modi asked Mamata pointblank about her stance on advocacy of two Prime Ministers in the country, one for J&K and another for India, which Omar Abdullah has asked for.

Modi told the assembled enthusiasts that he has a vision of  a ‘Developed India’ and asked the voters to cast their votes in favour of BJP so that his hands are made stronger and India can take the next step of growth.