Gung-ho! Farmers’ solution at last: And guess who has it? 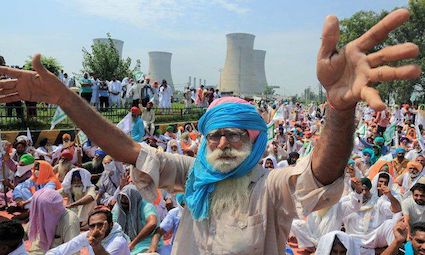 You and I are ordinary citizens of India. We are not distressed farmers, don’t have life-cards of Congress, Left or all those regional parties which are punching above their weight. We keep hearing of insidious BJP but  don’t have any personal experience. Most of us haven’t visited any media premises either in our lives.

Let’s take the present farmers’ protest and use only the time we take to empty our bowels in toilets. Life would become so much easier than be wasted in utter confusion which is spilling on to 2021, as if Covid-19 wasn’t enough.

Let’s say we have four characters in this drama: Farmers, Opposition, Media and BJP.

Farmers: It began from Punjab and Haryana. They hit the road—or railway tracks—early, in September itself, when three farm laws were passed. We first heard it was MSP, then it was the fear of capitalists and now it’s back to MSP only. They wanted nothing but repeal of farm laws. Now we hear they are willing to talk.

(So readers, if you are confused on MSP or Capitalists or poor farmers shivering in Capital’s cold, all those Bharat Bandhs, and Balidan Diwas and Kisan Diwas, and many more in waiting, you could find all your answers on our pages. You would know why MSP can’t become a legal statute; why Capitalists can’t usurp lands and why poor farmers actually would reap a harvest on these farm laws.

If you are still unmoved, just answer a simple query to yourself: If these laws were so monstrous, how come rest of farmers are so cool about it? After all, MSP concerns only 24 crops and 12% of India’s farmers. Should a sty be the reason for you to gouge out your eyes?)

Opposition: They are moving heavens. You know the characters: Badals, Amarinders, Kejris etc. Indeed, 11 Opposition parties have issued a statement. Rahul Gandhi has presented 2 crore farmers “list” to the President Ram Nath Kovind. Mamata is calling everyone to hit the street. They are in solidarity with protesting farmers. What do you think is their specific objection?

That the Centre passed the farm laws in haste. There was no proper discussion.

(Well, you can’t call it haste when a committee way back in 2017 itself had recommended these measures. No discussion? Well who do you think stopped it happening by climbing on chairs and breaking the mike of presiding officer in the Parliament?)

Media: The amplifier. It only questions, never answers. So as a reader, could we ask them the following:

A– When was the last you asked Congress of their polls manifesto promising the essence of these very laws to farmers? Sonia Gandhi anyone?

B– Why don’t you remember to question Kejri: If he finds these agri laws so harmful why did he notify one in the first place?

C– Leftist chief minister of Kerala, Pinarayi Vijayan is in support of APMC (mandis) when the State itself hasn’t not mandated on it all these years? Any questions you asked them which we missed?

D– Mamata is shedding tears—I didn’t say crocodile—but has West Bengal allowed the Rs 6,000 Central subsidy to reach its farmers? Did you ask: Ma’am we find your concern fake?

E– You file a RTI even on a paisa not reaching poor in MGNREGA. How about checking on the 2 crore farmers on Rahul Gandhi’s list? When Republic Network could access the sheet and find no signatures or phone numbers of farmers, why couldn’t you?

Not a word. Not a question to Opposition. No gentle nudging to farmers: What’s your problem when everything promises a better future? Don’t walk the path of Khalistanis etc but at least question if these could be traders in guise of farmers?

Instead, you have classic images of farmers in silhouette, in front of fire, craggy-faced women, wrinkled profiles, images of defiance when all you need to ask them is this: Problem Kya Hai?

Have you supplied these answers to your readers? Or worried that India is losing Rs 3,500 crores a day due to this agitation? Or wondered if its playing into the hands of our neighbouring enemies Pakistan or China, both breathing down our neck?

BJP: In one word, Lost. Poor chaps, what do you blame them for? Intentions? No. Execution? Yes. On Christmas today, the PM is holding a virtual meet with nine crore farmers to present the Centre’s position. Pamphlets, tapes, word-of-mouth is the outreach which BJP workers have been directed to do with the masses. They needed to hit the overdrive earlier. Indeed, they must have a template by now since anti-CAA, anti-Farm Laws would get a life of its own in different formats in our Republic from now on.

MSP? Capitalists? APMC? Mandis? Discussion? If you now have answers to all these and are still not disgusted with the loss to exchequer and threat to India’s security, where do you think you belong? Choose your spot: Either you belong to one of them (Farmers, Opposition, Media, BJP) or you are a citizen first.

On your position, rests the future of this country. For you alone could ask questions. And they better reply. Proper.