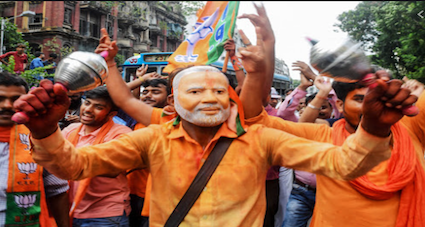 In first 70 years since indepedence, Hindu Bengalis of West Bengal were marked, by and large, as “communists” and “seculars”—in other words, anti-Hindu by nature.

But consolidation did happen in 2021—to the extent that “Jai Shree Ram” became a commoners’ slogan in the land of communism. So much so that anti-BJP lobby had to field Amartya Sen to orchestrate against the outcry of “Jai Shree Ram.”

The polls were marked by 100% consolidation of Muslim votes behind Trinamool which, in any democracy, is undesirable and creates a war-like situation which West Bengal is facing presently.

However, before we infer anything meaningful on ongoing violence in West Bengal, it would come handy if we analyse the assembly polls through two prisms:

Accordingly, total number of Hindu electorates of West Bengal has been extrapolated to be 67%, Muslims 31% & Other Communities 2%.

FINDING 1: Considering overall average voter turnout to be 75%, it becomes apparent that 45% of casted votes came from Hindus, 29% from Muslims & 1% from other communities.

FINDING 2: Only 41.6 per cent out of all 100% Hindu votes went to BJP; 10.9% to TMC  and 14.6% to Left, Congress, ISF, NOTA and independent candidates. As many as 32.8% of Hindu electorates abstained from voting. This decidedly had a major impact on the outcome of the Bengal polls results.

(However, this exhibits that almost 42% of West Bengal’s Hindus indeed consolidated behind BJP. Only 10.9% chose Trinamool Congress. This explains that post-poll violence upon Hindus most likely is vengeance against the Hindus. Once booth-wise mayhem is corresponded with electoral outcomes, it does point that violence is anathema to Hindus. But it also underlines that Hindus predominantly refused Trinamool Congress this year. So that “communists” and “pseudo-seculars” type pigeon-holing doesn’t fit as only 14.6% of all existing Hindus voted for the 3rd Front this year of which Communists were a mere fraction.

FINDING 3: Out of 100% cast Hindu votes, that is considered all caste Hindu votes, 62% went to BJP, 16.2% to Trinamool Congress and 21.8% to Left, Congress, ISF, NOTA and Independents combined. This implies that BJP got approximately 400% Hindu votes to what Trinamool Congress managed. It’s also fair to say that those facing wrath in the State today are also Hindus.

FINDING 4: So if 83.8% (62%+ 21.8%) of Hindus voted against Trinamool Congress, it indicates a huge anti-incumbency against the ruling party. Why Trinamool Congress still retained power is a subject which would be dealt with separately.

FINDING 5: In all, 73.99% of all those Hindus who voted against the Trinamool Congress, voted for BJP. And 26.01% of anti-Trinamool Hindu votes went to Left, Congress, ISF, NOTA and Independents combined.

(This reflect that out of 67.2% of total Hindu electorates, as many as 62% voted in favour of BJP, if the average voter turnout is assumed to be 75%.)

So ethically, and morally, BJP leadership cannot leave Hindus of Bengal to face persecution on their own. It’s the responsibility of the BJP to do justice to those 38.1% of the total electorates in Bengal who voted for them.