Honoured and invited by Modi; ignored by Lutyens Media 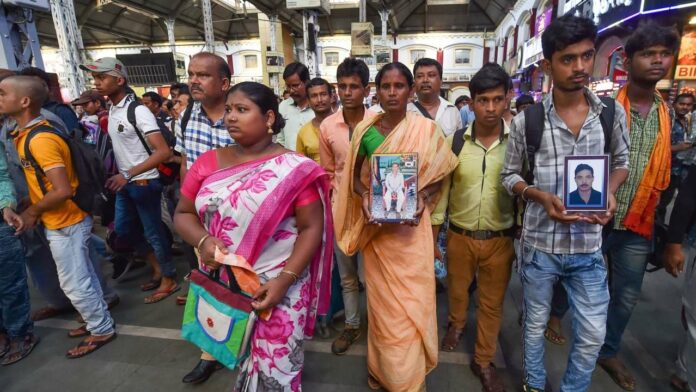 The families of the BJP workers, murdered in political violence in TMC’s West Bengal, invited by Prime Minister Modi at his swearing in ceremony yesterday, stood at the parapet of the reporting zone, ignore by Lutyens media. While the lenses zoomed in, over the Netas and pens rolled over the pages of elite press, these guests did not find themselves covered by the Lutyens Media.

The recently concluded Lok Sabha elections witnessed its most violent rounds of campaigning in West Bengal where Bharatiya Janata Party has accused Trinamool Congress of killing dozens of its workers. As a mark of gesture and respect for their sacrifice, their families were invited to attend the oath ceremony of Prime Minister Narendra Modi. Alongside, kins of martyrs of Pulwama attack were invited too.

The media chose to ignore their presence at the ceremony, concentrating on a dated report on their arrival in the Capital. Indian Express, typically, had a mischievous headline: “Kin of Bengal BJP workers wait for job, justice and glimpse of Modi.”

Still, they deserve spotlight and NewsBred duly brings reaction of few of these visiting guests for its’ readers.

One Sukumar Mondol said, “Modiji visited our place, in Cooch Behar, but violence erupted after he left. TMC goons attacked our bus and my brother fell down and got killed. Kailash Vijayvargiya (BJP in-charge in Bengal) attended his funeral and give us Rs 40000.00 as help.” He added,” I am here with my deceased brother’s son.”

Sushil’s widow tried to lodge written complaint at local police station, but she said policemen refused to lodge it.

Kharna Pranti, widow of Joydip Pranti  from Krishnanagar constituency, said, “I have come here to seek justice. I want killers of my husband hanged”.

There seems little let up on violence against BJP workers in the wake of Modi’s triumph in 2019 General Elections. So far, across the country, nine BJP workers and their supporters have been killed.

The invitation to the kins of martyred families upset Bengal CM and TMC chief Mamata Banerjee immensely. Reacting sharply, she declined PM Modi’s invitation to the swearing-in ceremony claiming that the deaths were due to their local and personal matters and TMC is not responsible for their deaths.