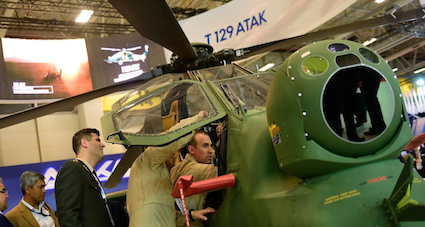 The Pakistan’s  dreams of acquiring Turkish  T-129 ATAK helicopters is busted now since US has put sanctions against Turkey from exporting military hardware. The American authorities, following Turkey deciding to go ahead with the purchase of Russian S-400 air defense systems, had put the sanctions. Washington’s numerous warnings to Turkey fell on its deaf ears and finally US had no option but to impose sanctions on Ankara and scrapped the deal for the fifth-generation F-35 stealth fighters.

This was confirmed by Turkish Presidential spokesperson Ibrahim Kalin when he said that Washington has prevented the country from supplying 30 homegrown attack helicopters to Pakistan, earlier this week. “The US has blocked Turkey’s helicopter sale to Pakistan, which will likely lead to Islamabad buying it from China,” Kalin was quoted as saying by Bloomberg.

“The helicopters can be welcome additions to the Pakistani military as they are as good as those developed by the US and European firms”, Pakistani Army Brigadier Farooq Hameed (retired) was quoted saying, before the US sanctions.

The Pakistani authorities had assumed acquiring the deadly choppers shortly. Their analysts opined that the Turkish helicopters are perfect for the country as they could be lethal under all circumstances. The helicopters could carry out day-and-night surveillance operations, as well.

Washington’s sanctions has not only hit Ankara hard, but the repercussions for Pakistan are more severe to absorb. The deal, however, has faced numerous delays, one in July 2019, days before a meeting between the former US President Donald Trump, and Prime Minister Imran Khan in Washington.

Developed by Changhe Aircraft Industries Corporation (CAIC), these choppers have been designed primarily for carrying out anti-tank warfare missions. It also possesses the ability to conduct secondary air-to-air combat capability. The ATAK T-129 is a twin-engine, tandem seat, multi-role, all-weather attack helicopter based on the Italian Agusta A129 Mangusta platform. Pakistan has been looking to procure this helicopter to improve its offensive capabilities.

The right of US over these Turkish helicopters’ production and exports lies in the fact that though the helicopter’s weapons, avionics, and airframes have been built by Turkey, the US has developed its engines and fans. The helicopters are powered by two T800-4A engines, manufactured by LHTEC, a joint venture between the American firm Honeywell and the British company Rolls-Royce.

And it is the stationing of the American engines in the helicopter, which becomes the fundamental reason why the US does not allow Ankara to supply the choppers to Pakistan. Simply put, Turkey has reserves the rights to the helicopter’s design, the US can ban the sale of this helicopter to a third country, in this case, Pakistan. This is in accordance with the terms of the partnership between Ankara and Washington.

For decades, China has been a major defense supplier for Pakistan. The Chinese Z-10 helicopters will be next in line now that the  Turkish deal has fallen through.