In looking to float an Indian-BBC, Modi could have his finest hour yet 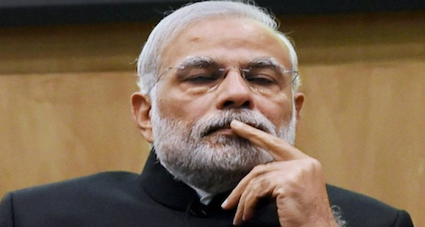 It would appear that the Modi government has realized that the crisis in journalism is crisis in Indian democracy.

Thus it has plans for international public broadcasting, a la BBC, with reporters all over, offices all over, telecast all over.

I just hope its vision is not just about busting the lies of Indian and Western media alone.

Public, after all, should be at the heart of public broadcasting.

Indian and Western media is in the hands of a few who just not only control your newspapers but also your magazines, books, movies, television, radio and a host of digital rats, overt or covert.

Big corporates own them, like Amazon (Washington Post) and Murdoch (you would be sick counting the names) and so does our Lutyens Media in hundreds of quid pro quo deals. When have candy or automobile makers, or Big Techs, celebrated competition? Who looks at the equation between value and quality?

This is corporate media not for ordinary folks like you and me. When rich don’t care for poor, why would your media? And if masses are left un-catered, what are we celebrating as democracy?

When regional newspapers stutter, local newspapers rely on benign pennies, local content is drowned in “syndicate news,” why is it the fourth pillar of Indian constitution, mouthed as looking after public interest?

Now try finding your civic and democratic values in this dung-heap: As you do the needle in a haystack.

It has left with a dysfunctional democracy, cruel to you and me.

Come to think of it: That’s more power than any despot or dictator has had over its masses at any time in history.

So let’s be on our feet to welcome Modi’s move on public broadcasting. We won’t mind spending our public money on such a public endeavour.

I have been in the business of news for a distressingly long period. I have colleagues who squirm at the line their editors take at the behest of their employers. But they are told its advertisers, and not news, which has got them a stool in the newsroom in the first place. You could uphold your moral fibre and quit and are never rehired: Who takes over a trouble-maker and whistle-blower anyway?

Next time you pick your newspaper, look at where ads are: They are in the infotainment section. You won’t find a Pepsi ad on a page which is full of funerals and burning pyres.

Or you have the full-pagers from politicians like Arvind Kejriwal. What do you think your editor would do when the employer walks into his cabin and says, hey, wisehead, I know you have a job to do but look, this man gets so easily upset that he removes those Hindustan Times journalists from his Media Group who do one, just one, critical piece. When do you think you would get ads for Titan watches if Cyrus Mistry had your backing against Ratan Tata?

Marketing heads and not editors own front pages. They also tell them a story they could do without.

So if and when this international public broadcasting from India arrives on the scene, let’s hope it would worry less about an anchor’s hairdresser than about what he has beneath his hair.

It won’t mind having crusaders who could poke the finger in your eye on the screen in public interest.

It won’t have to depend on a Shahrukh Khan (“I have made it large) or a Ajay Devgun (Iske Dane Dane Me Kesar Hai) for surrogate advertising on products which are most harmful to public health till Covid-19 came into our lives.

This public broadcasting would reach far more people than I do with my NewsBred on rationed personal funding.

It would tell citizens that Narendra Modi must be doing something seriously good for such a vicious, toxic attack to get him.

But our media mandarins couldn’t care less. Nor would the Press Council of India, a constitutional body, which is less than a year old on twitter and on an average tweets once a month. And that’s because they don’t have people on mind. And that’s why we need serious public broadcasting.

I only hope the Modi government doesn’t hold itself back. Public broadcasting ought to be the first of many such endeavours to help decolonize Indian mind. Local news is another which needs a massive boost in the arm. India must not become a Corporate State. And that’s what Lutyens Media and Western Media want at all cost.