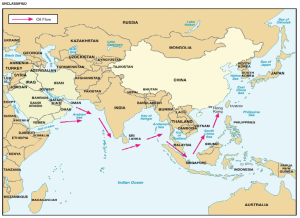 The Indo-US agreement on sharing military logistics to counter China’s assertiveness in Indian Ocean could have wider ramifications.  The two can use each other’s land, air and naval bases for supplies and repair. A piece on the essentials of this conflict:

India and China have been engaged in a Cold War since the beginning of 2015.

New Delhi feels a certain hegemony over Indian Ocean. China, which views it as vital to its survival as a trade route, won’t let it happen. The trade deficit between the two doesn’t help the cause.  Both are wary of each other. It’s a real bad news for the future of BRICS and Shanghai Cooperation Organisation (SCO)—much to the delight of western powers.

India has made a few moves in recent past which shows its anxiety. Modi visited Seychelles, Mauritius and Sri Lanka in March last year but ignored China-friendly Maldives as an apparent snub. Also a conference of “Indian Ocean: Renewing the Maritime Trade and Civilisational Linkages” was held in Bhubaneswar.  India wants its own Cotton Route to challenge China’s New Silk Road.  The Grand Prize of East Africa doesn’t lessen their friction.

China has its own “String of Pearls” strategy. The Gwadar port in Pakistan; naval bases in Myanmar, intelligence facility in Bay of Bengal, a canal-in-construct across the Kra Isthmus in Thailand, a military tie-up with Cambodia and building military bases in the South China Sea. The “String of Pearls” is meant to secure the sea lanes from the Middle East to the South China Sea for its energy and security concerns.

With the Strait of Malacca enabling almost 80 percent of passage to China’s energy needs, it has looked to build its naval power at choke points along the sea routes from the Persian Gulf to the South China Sea.

A look at the two Asian powers’ position vis-à-vis critical nations/islands strewn across the Indian Ocean:

This Southeast Asian state was close to China for two decades. But in 2012, it began a “pro-democratization” process—most likely under US pressure—and is now seen close to India. The two together plan to extend Myanmar-Thailand Highway into a trilateral deal.

India’s “Cotton Road” strategy is meant to counter China’s One Belt, One Road (OBOR) plan. India wishes to integrate with its ASEAN counterparts and block china from dominating these states.

In a surprise result last year, the pro-China leadership in Sri Lanka, under Rajapksa was ousted and pro-India Sirisena came to power. The first thing Sirisena did was to suspend China’s $1.4 billion investment in port infrastructure.

With Sri Lanka back under India’s influence, for the moment, the link between Maldives and Myanmar for China has been “cut,” so to speak.

Pakistan has decisively moved into China’s arms and there’s no going back on it. The $46 billion Pakistan-China Economic Corridor is well and truly underway. From an Indian perspective, it’s a bad news.

In order to counter China-Pakistan alliance, Indian prime minister Narendra Modi went to Bangladesh and paved way for resolving the 40-year old border disagreement. It can also have a vital impact on India’s control of its northeast region.  India can also now directly use Bangladesh’s ports, instead of relying on vulnerable Siliguri Corridor. Till Modi visited Bangladesh, the latter had been cuddling up to China.

Nepal has been a clear loss to India.  New Delhi reacted badly to Nepal’s new federative constitution, as did the pro-India Madhesi ethnic group that occupies the Terai border. Subsequent riots and Indian trucks refusing to cross the border into Nepal worsened the situation. Kathmandu sees the hand of New Delhi in this unrest.

China moved in swiftly, providing 1.3 million litres of petrol and signing a deal to fill in Nepal’s demand in the face of India’s monopoly. In one swift action, Nepal has pivoted itself on China’s axis. China surely eyes the control of strategic Karnali and Koshi rivers that sustains 200 million Indians who live at the southern border.

The ouster of former head Nauseed and his Maldivian Democratic Party is a big blow to India’s plans for this little island nation. The current president Yameen is well-disposed towards China which gives it a proxy control on this island chain. There have been multiple attempts on Yameen’s life and India has found itself drawn into the scandal.