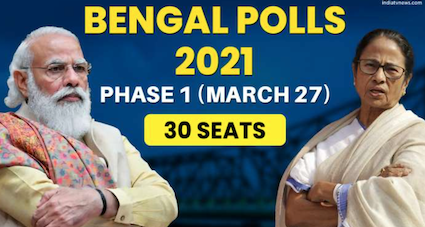 First phase of West Bengal Poll is being held on Saturday. 30 assembly seats are going to poll, including 4 or Bankura district, all 9 of Purulia, all 4 of Jhargram, 6 of Paschim Medinipur and 7 of Purba Medinipur. What would be the likely outcome?

The constituencies of Bankura, Purulia, Jhargram and Pashchim Medinipur districts are inhabited by a significant percentage of Scheduled Castes and Scheduled Tribes and predominantly comprise rural electorates. They have been the real deprived class since 1967. As per 2019’s voter list, there are 2.2 lacs of electorates per constituency on an average, each having almost equal numbers of male and female voters. Voter turnouts in these constituencies generally remains above 80%, reflecting high electoral enthusiasm.

While TMC won the seats in 2016 polls, all the four seats of Bankura Loksabha went to BJP with higher vote share than any other political party. In present scenario, there is euphoria for saffron in Bankura and no less because of campaigning by prime minister Narendra Modi himself.

Modi has been quick to highlight the core issues of Bankura, Purulia, Jhargram and Paschim Medinipur, they being scarcity of water, lack of infrastructure in agricultural irrigation, little livelihood or ease of living for women. Modi has hit the hot button of Rarhbanga electorates. Rangamatir Desh senses a saviour in Modi. He also remains favourite among women electorates as he knows exactly what ails women in their day-to-day lives. Rarhbhanga has enormous potential in travel n tourism, MSMEs, forestry and agriculture.

Mamata Banerjee’s campaigning, on the other hand, mainly consists of BJP-bashing. Purulia and Jhargram are saffronized since 2018 Panchayat elections. People here remember the mayhem created by TMC thereafter. Hijacking of central projects like Pradhan Mantri Awas Yojana, and tolabaazi has made people go cold on Trinamool. BJP men like Dulal Kumar, Trilochan Mahato of Purulia have been victims of brutal political violence. Union home minister Amit Shah has personally visited houses of political victims and committed to stay beside their families, including remittance of an ex-gratia up to Rs. 25 lacs – it has featured even in the Sankalpa Patra of BJP.

In Pashchim Medinipur, each seat had voted decisively for BJP in the 2019 Lok Sabha polls except Shalboni where TMC got marginally higher voter share there than BJP. Shalboni could be a different story this time around with Suvendu Adhikhari joining BJP. All the constituencies have high percentages of SC-STs, more so in Medinipur and Jhargram both of which were won by BJP’s Dilip Ghosh and Kunar Hembram in 2019 Lok Sabha polls. The rural electorates are almost 95%; indeed the entire voters’ populace in Dantan is rural.

Purba Medinipur is a land of fiery nationalism. The land is now having their Ghorer Chile Suvendu Adhikari in the saffron party. Kanthi indeed is known to be the fortress of Adhikaris. In the 2019 general polls, Egra under Medinipur voted for Dilip Ghosh. BJP, further, didn’t lag by much to TMC in Ramnagar and Khejuri constituency. BJP’s vote shares in Kanthi Uttar was 6% less, Kanthi Dakshin 10% less, Patashpur 7% less, Ramnagar 3.5% less and Khejuri only 2.78% less than those of TMC. All these assemblies belong to Kanthi which was won by Sisir Adhikari in 2019 Lok Sabha polls. Adhikari is a huge factor in plus for BJP.

Medinipur, critically, is a land of sharp minds and conscious voters. Farming is a prime economic activity here and farmers hereof  have remained deprived of PM Kisan Samman Nidhi for last two years. The saffron party has committed itself to pay them the whole amount due along with the one of present year. The cashew nut farmers of Kanthi Dakshin know where their interests rest. They could wipe out the 10% vote share-gap in favour of BJP. Apart from agriculture, Medinipur is a district of immense potential in education, tourism, MSMEs and general infra.

From the antecedents of both the parties, Medinipur knows it in her heart that Deep Sea Port at Tajpur, if ever built, would be built by Modi’s BJP & not Mamata’s TMC. People of Purba Medinipur are aware of realities. They know if works are done, sky is the limit for the district’s financial development. Hence, Purba Medinipur constituencies are expected to go for “Double Engine Ki Sarkar”.

One shouldn’t discount the public anger at the cut-money culture. EVMs could absorb a lot of this negativity against TMC. People of this part of West Bengal have started identifying Mamata Banerjee’s politics as one of opportunism and convenience. SC, STs and Adivasis of the districts are disgruntled. They have turned saffron from within. Suvendu Adhikari factor is expected to add to BJP’s portfolio in Pashchim Medinipur and Jangalmahal. ( Is that the reason why State Police intercepted Suvendu Adhikari’s rally in Ramgarh, Jangalmahal on March 24?)

In the Battle for Bengal, violence could never be ruled out. All attempts would be made to manipulate, trick and terrorise the voters. Election Commission would require due administrative pro-activity. If people can vote fairly and peacefully, Saffron hues are on the horizon.