Lavrov is at home in India: And West is grumpy! 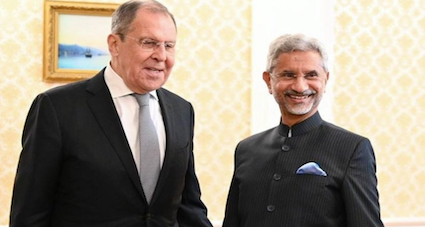 All have come. All have failed.  For when Russia’s foreign minister Sergey Lavrov meets his counterpart Dr S Jaishankar, and later the prime minister Narendra Modi over the next two days, he would still feel at home.

That won’t please the West, of course. Over the last one week, we have had biggies from the United States, Germany, Greece, European Union, Japan, Australia, Britain etc in town, asking India to disown Russia, sometimes in language which was extremely coarse and distasteful.

The US has used words such as “shaky” and on “wrong side of history” for India, warning that there could be “consequences” if the US-led sanctions are subverted. Germany has been frontal in wanting India to be “in its camp.” British foreign secretary, the petite Liz Truss, says their business outlook would depend on the countries they could “trust.”

Of course, most of the world hasn’t joined the West-led sanctions. The diplomatic quarters know that these sanctions are unilateral and flout the UN Charter; that Ukraine was being “Nazified” by the West, both going back respectively on the Minsk Agreements and the word that NATO won’t set foot in Russia’s neighbourhood etc etc.

After all what Russia wants? It just wants a guarantee that Ukraine would be neutral and bereft of Nazis who are embedded in Ukrainian army.

Is it really such a big ask for West to concede and wreck the world which still can’t do with Russia’s metals, agriculture and energy?

And if West views Russia’s concerns on its neighbourhood unfair—remember Hitler’s army had marched through Ukrainian lands which left 42 million Russians dead in the World War II—the US shouldn’t mind if Russia has its nuclear missile placed in the neighbourhood of Washington, say in Cuba.

An undaunted India is doing what is best for its economy, its people. It won’t let go on the deep discount on Russian oil and has ratcheted up its buy in a month to almost what it bought in the entire 2021. The Bank of Russia and RBI is working out an alternative payment mechanism. India’s finance ministry is setting up an inter-ministerial group to resolve the payment issue in trade with Russia.

So when the West doubles down on India, and warns it of “consequences” for buying oil from Russia, could we really fault Dr S Jaishankar when he tells some plain truth: That it is Europe which has bought 15% more oil from Russia than it had in the month preceding the Ukraine Crisis. For good effect Jaishankar added: “In three months time, when we look at the big buyers of Russian oil and gas…I suspect we (India) won’t be in the Top 10.”

“It looks like a campaign on this issue”, said Jaishankar, no doubt peeved that the colonial powers still think they could push India around even while doing exactly the opposite themselves.

Make no mistake. India is indispensable to West. And that’s because without India, it can’t play its favourite game of encircling its arch enemy China. If China is to be inconvenienced in its neighbourhood, like Ukraine presently has been done for Russia, the West needs to stoke the war-heat in Indo-Pacific where India has a geographical location like no other amongst QUAD members.

All the US wants is to weaken Russia-China alliance. If one goes, the other would be all that easier to deal with. But its worst nightmare would be if instead of unhinging Russia-China, it actually brings Russia-China-India together. For that would mean losing the entire Eurasia, and being relegated to the status of a rustic island, 6,000km nautical miles away.

Sure, the West would entail a cost on India’s neutrality. It would make life difficult for Modi and his India. It would stoke anarchy besides applying the financial strangulation.

But then who said throwing off the yokes of Empire, and helping the world change forever for right reasons, would come free?