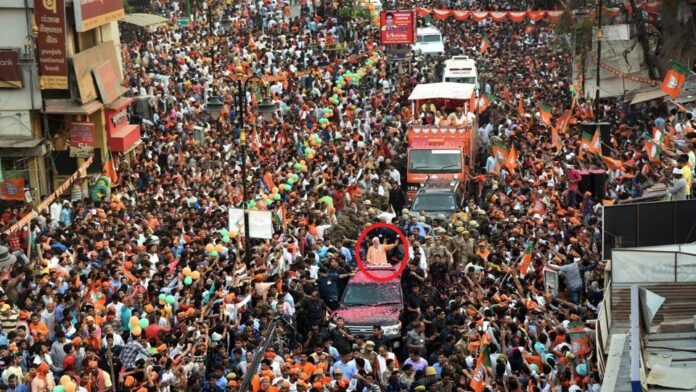 The surge of saffron in Kashi (Varanasi) around Prime Minister Narendra Modi’s visit on Thursday must have struck a deep scar in the hearts of his and BJP’s opponents.

The ploughing through, in the deep, distant and inimical pockets of North East, Kerala and other parts of  South India,  where Prime Minister Narendra Modi and Bhartiya Janata Party was unheard of and detested till not so long ago, a wave for the party and the PM is blowing  there during 2019 General elections. The marvelous orator that he is, Narendra Modi has successfully pulled the rug under the feet from the established political players of decades.

With more than half of the seats polled, PM Modi has emerged as an effective communicator, not unlike 2014, making deep inroads in the territories, unconquered till date, and where an emerging surge in his support is palpable. It is to the credit of Modi that he is concentrating more on those constituencies and states, where BJP is believed to be a poor performer rather than confirmed citadels in Hindi heartland.

A casual glance at the itinerary of his rallies from late March till phase 3, ending April 23,2019, reveals that the strategy of Modi has been to consolidate the party where it is weak. In states like West Bengal and Odisha, Modi has witnessed a frenzy of support. In West Bengal, Trinamool Congress supremo and Chief Minister Mamata Banerjee’s policy of appeasement of Muslims and encouragement of illegal infiltration of Bangladeshis has resulted in alienation of peaceful and law abiding Majority Bengali Hindus. Modi addressed this insecurity amongst the Hindus as well as the security concerns of the nation, which touched the chord amongst people there. The rise of hooliganism, goondaism and corruption under Mamata’s rule is being highlighted by BJP and Modi, which is lapped up by the suppressed Bengali ‘Manoos’ there. The “Poribartan’ slogan, instituted by Mamata a decade ago, has a different meaning today.

BJP has eyes on Karnataka, specially on those constituencies where it missed out by a whisker.  Modi’s allies in Tumkur, Mysuru, Gangavati, Chitradurga, Bagalkot etc, saw a massive support in Modi’s favour. The PM highlighted the tremors in Congress- JDS government where the Chief Minister H D Kumaraswamy is working with his hands tied. ”The CM was seen crying many times, showing his helplessness,” shot Modi, indicating the compulsions of ‘Mahamilavati Sarkar.”  If the thronging of the supporters and public in these rallies is any indication, then winning 20 seats, which BJP aims in Karnataka, looks achievable. In 2014, BJP won 17 out of 28 seats.

Though in a nascent stage, BJP has found a big ground in Kerala. Supreme Court’s decision on Sabarimala, allowing women between 10 and 50 in the temple, has consolidated Hindus into a bloc, albeit on a limited scale, but BJP has found a firm feet in Kerala. The political pundits of Kerala opine that this decision would alienate Hindus from Left led  Left Democratic Front (LDF) and Congress led United Democratic Front (UDF) towards BJP. Though the shift could be marginal yet the tremors can be felt by the both big parties. In a rally in Kozhikode, Modi highlighted, “UDF stands for corruption and LDF stands for communalism”, while blaming UDF of multi-crores scams in Kerala and for killings of Rashtriya Swyamsewak Sangh (RSS) and BJP workers in the state.

Appealing the supporters in the southern state to vote for the BJP in the ongoing General elections, PM Modi said, “The faith and affection towards the BJP and me has only increased over time. I am here to seek the blessings of the people so that we continue to transform this faith into rapid development. This is why, I urge all the eligible voters in Kerala to turn out and exercise their franchise in support of the BJP during these elections and strengthen our resolve to bring rapid development in Kerala.”

Modi further added that fielding Rahul Gandhi from Wayanad is not any step towards development of the constituency but an extension of their policy of appeasement.

PM Modi added, “Only the BJP can ensure social justice for every group in Kerala. Everybody has seen how the UDF and LDF are threatening the traditions and religious practices of the people here while they indulge in corruption, bribery and other illegal activities. Can anyone forgive the Congress for the humiliation and suffering it gave to Nambi Narayan, whose entire career was destroyed by the false allegations of the Congress. This is the true face of these parties, they are not people-centric, they are ‘family-centric’ instead.”

Ironically, the tacit understanding between the Left and Congress elsewhere in the country, have made them opportunist adversaries in West Bengal and Kerala.

The picture is no different in North East. The changing demography in North East, especially Assam and Tripura have seen an influx of Bengali infiltrators.  The implementation of ‘National Register of Citizenship’ by the BJP government has found acceptance amongst the ‘native’ Assamese population.