Mamata has egg on her face ahead of 2019 Polls 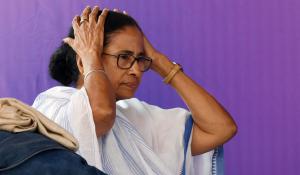 West Bengal Chief Minister Mamata Banerjee has egg on her face and it’s just not because Election Commission (EC) has doubted the integrity of her government to hold fair and neutral 2019 Lok Sabha polls, stretched over seven phases, beginning this Thursday.

The arrongant “didi” was taken to cleaners as EC publicly humiliated her for questioning their decision of relieving four senior police officials from election duties and the language was scorching: “It would not be correct and dignified to respond to such averments to prove/burnish its credentials,” EC stated in a letter.

On Sunday, Prime Minister Narendra Modi descended on her home turf in Cooch Behar and tore into her in his inimitable style: “Didi is losing her cool. She is having sleepless nights right now. She is showering abuse on me; venting her anger on Election Commission.”

Bengal under Mamata Banerjee is a terrifying spectacle during polls with rampant intimidation, violence and killings. It shakes the conscience of every citizen of the nation, barring Lutyens Media which looks the other way. Such violence has a terrible effect on rival candidates and their supporters who go underground during elections. Example: During the Panchayat elections last year, 34 per cent of the seats remained uncontested—all wrapped by Trinamool Congress (TMC). Even filing of nominations meant violent attack on opposing candidates. No less than Supreme Court had to step in to ensure candidates could file nominations without looking over their shoulders.

In this spell of terror, the entire state machinery—press, bureaucracy, police and administration—seems to be working towards one and only goal—winning elections.

So Election Commission (EC) has cracked the whip in the forthcoming general polls. It was just not on whim too as EC took due care of deputing a special police observer (Vivek Dubey) whose feedback only confirmed their worst fears of poll officers of dubious integrity.

Mamata, as is her wont, had lashed out in all directions, blaming the Centre as biased and EC as carrying out their diktat at the behest of ruling party. EC in its letter also quoted the relevant provision to emphasis its authority: The provisions of section 28A of Representation of People’s Act 1951 empower EC to have police officers posted for election duty directly under their control.

Modi has been drawing unprecedented crowd in West Bengal during his rallies which has shaken the unbridled control of Mamata Banerjee over her state. The real threat to TMC doesn’t come from Congress or Left—it’s from the “saffron” colour of BJP. The BJP is targeting at least half of 42 seats which West Bengal sends to the Parliament.