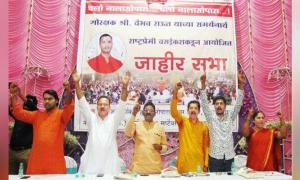 Prime Minister Narendra Modi and quite a few of his senior colleagues have taken exception to the almost dismissive comments of Sam Pitroda, a close aide of Congress president Rahul Gandhi, on Pulwama attack and the retaliatory Balakot surgical strike by India.

In a series of damning tweets, Prime Minister Modi appeared livid as under the tagline, #JanataMaafNahiKaregi, he said: “Opposition insults our forces time and again. I appeal to my fellow Indians—question Opposition leaders on their statements. Tell them – 130 crore Indians will not forgive or forget the Opposition for their antics.”

Pitroda, head of India Overseas Congress, in an interview had made this objectionable remark: “I would like to know more as I have read in New York Times and other newspapers, what did we really attack, we really killed 300 people?”

Not only Pitroda questioned the “proof” of the Balakot attack, he also was dismissive of Modi government’s approach in the wake of Pulwama attack on February 14 which killed 40 CRPF jawans.

“Eight people come and do something, you don’t jump on entire nation (Pakistan). Naïve to assume that just because some people came here and attacked, every citizen of the nation is to be blamed. I don’t believe in that way,” commented Pitroda.

“I don’t know much about attacks, it happens all the time, attack happened in Mumbai also, we could’ve then reacted and just sent our planes but that is not right approach, according to me, that’s not how you deal with the world.”

Condemning the Pak apologists, Modi tweeted: “The most trusted advisor and guide of the Congress President has kick-started the Pakistan National Day celebrations (March 23) on behalf of the Congress, ironically by demeaning India’s armed forces.

“Loyal courtier of Congress’ royal dynasty admits what the nation already knew—Congress was unwilling to respond to forces of terror. This is a New India—we will answer terrorists in a language they understand and with interest!”

National Conference leader Omar Abdullah, as expected now that his party is an ally of Congress in Jammu and Kashmir, came out in support of Pitroda.

Meanwhile BJP President Amit Shah echoed the words of his Prime Minister Narendra Modi and urged the voters to do a surgical strike in the Lok Sabha polls against “Congress Culture.”

Finance minister Arun Jaitley was equally dismayed: “There’s no country that has criticized the surgical strikes or the air strikes conducted by India except for one nation, Pakistan. The fact that senior Congress leaders are speaking the same language is unfortunate and also hurts the sentiments of the country. To say that the Pulwama attack was self-engineered is a blessing for Pakistan’s narrative.”

“Opposition is the natural habitat of terror apologists and questioners of our armed forces. This reprehensible statement by a senior leader like Ram Gopal ji insults all those who have given their lives in protecting Kashmir. It humiliates the family of our martyrs.”

Yadav had said: “Paramilitary jawans are unhappy with the government. Jawans were killed for votes…There was no security check between Jammu and Srinagar. The jawans were sent in simple buses. This was a conspiracy.”