New Delhi calling Tehran: An Afghanistan both can’t afford to lose to Pakistan 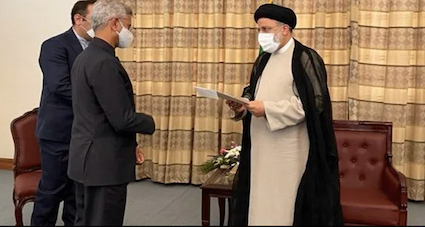 Imagine you have a dispute in neighbourhood. But the mediation is brokered by the colony next. Worse, it listens to one neighbour and ignores the others. How do you think you should react?

India and Iran have similarly been cast on the sidelines. Talibans are taking over Afghanistan by violence and bloodshed, but US-Russia-China and Pakistan are meeting in Doha on Wednesday. India and Iran? Not invited.

It only gets worse. Iran is seeing a saviour in China and its’ promise of $400 billion. India is now perceived firmly in US camp. But both China and US are condescending even towards their friends. How do you think two of world’s oldest civilizations, with centuries of cultural and language ties, not to speak of economic bond, should react?

Get together. That’s what India and Iran have done. India’s external affairs minister Dr S Jaishankar had visited Tehran twice within a month and was indeed the first foreign dignitary to greet the new Iranian president Ebrahim Raisi. The latter has been similarly effusive in playing the host.

Both India and Iran are peeved at the presence of Pakistan on the table in Doha. For good reason. Pakistan and Talibans are glued as one on the Pashtun card. If Talibans are in control, India could expect terrorists at home in multiplied numbers. A Shia Iran too has never been enamoured by Pakistan’s status in the Sunni world to go with its treatment of Shias at home. Besides, Talibans could wipe out considerable Iranian influence in Afghanistan.

In physical terms, eastern Iran would run dry if Helmand River doesn’t flow from Afghanistan. Talibans in control are perfectly capable of this mischief, to go with narcotics and dumping even larger number of Afghan refugees—mostly Hazara Shias—inside Iranian borders. Iran has also spent hundreds of millions of dollars in Afghanistan which given its financial woes should tell you how important the landlocked nation is to Iran.

In cultural terms, millions of Afghanis, including educated elites, have lived and studied in Iran. Dari, one of Afghanistan’s two official languages, is spoken by roughly 50 per cent of the population and is closely related to Persian (Farsi), Iran’s official language.

We need to dwell a little more here to gain a historical perspective on the matter.

Some one million Iranians live near Sistan-Baluchistan’s Hamun Lake which are fed by Afghanistan’s Helmand River. The locals depend on this water to such an extent that they were forced to abandon 124 villages in 2001 when the lake dried up on drought. Chillingly, Afghans in the past have completely cut off the Helmand’s flow into Iran. What if Talibans were to do likewise, sheathing themselves in the garb of building dams for development?

There is a precedent too. In 2011, a captured Taliban commander claimed that Iran had offered him $50,000 to sabotage the Kamal Khan Dam in Nimroz province.

There is also Harirud River which flows from Herat into Iran’s Khorasan-e-Razavi province. Around 3.4 million Iranians, including the massively populated Mashhad, rely on the Harirud.

Besides, some 20 per cent of Afghanistan is Shia. Among them are the Hazaras, a much-persecuted minority group in Afghanistan. It’s the largest Shia group but there are others too like Qizilbash, the Farsiwan and the Sayyeds.

Indeed, Afghanistan is one thing on which the West-dominated monarch Mohammad Reza Pahlavi and the present Islamic Republic which replaced him in Iran, were in sync. Both viewed Afghanistan as a matter of utter national security.

Well, a lot. In physical terms, India has invested some $3 billion in Afghanistan’s well-being. It’s wary of Afghanistan out of its bound if Talibans were to take over completely. The trade between the two countries, at the moment, is problematic: Afghanistan can send its goods through Pakistan but India can’t and the other two options of air and sea are neither economical nor enough.

India is also Afghanistan’s most cherished friend. It was the first country to recognise the Soviet-backed Democratic Republic of Afghanistan in the 1980s. It’s humanitarian and reconstruction aid is overwhelming. India has built hundreds of public and private school, sponsoring and hosting thousands of scholarships and students. In 2011, India and Afghanistan signed a strategic partnership agreement—Afghanistan’s first since the Soviet invasion of 1979. Gallup polls in the past have said over half of Afghanis approve of India as friend.

And then there is Pakistan

It’s now easy to comprehend why India and Iran are on the same page on Afghanistan. Both are wary of Pakistan and the influence it could wield through Talibans inside Indian and Iranian borders. Talibans presently are capturing city after city—Kandahar, Lashkar Gah, Herat, Kunduz etc—and as Afghanistan’s foreign minister Mohammad Hanif Atmar has said, it could unleash over 10,000 regional terrorists across a vast spectrum of groups—Lashkar-e-Taiba (LeT), Al-Qaeda, Ansarullah, Jundallah etc across its borders. Taliban in control of Afghanistan could be a disaster for India and Iran.

Iran has similar reasons against Pakistan’s influence in Afghanistan.Pakistan is nuclear-powered and would gain a bigger heft in the Sunni world if it was to be in control of Afghanistan.

A silver lining on the horizon

The Afghanistan conundrum is having a sweet fallout though. India and Iran were close friends and economic partners, trading even in their own currencies, when India was shackled by the sanctions and hostile attitude of the United States against Iran. Under the US pressure, India put a stop to its imports of Iranian oil. The trade between the two dropped to one-third of good days since 2018.

India’s biggest regret was the non-optimum use of Chabahar port which it had helped build in Iran in the hope of not only opening up Afghanistan but also finding an access to Middle East and Central Asia. India also wants to include this port in the framework of International North South Transport Corridor, a project which aims to connect India beyond Central Asia to Russia.

Tehran responded to India’s drawing down of ties by giving contracts to locals on Chabhar-Zahedan railway and the Farzad-B gas field project which was for India’s taking.

Iran too has reasons to warm up to India. It can’t be sure of China’s hegemonic ambitions, a fear which is singularly absent in ties with India. It wouldn’t like to be China’s lackey.  Further, it’s active role in Afghanistan would free itself of regional constraints and make it an important player for global powers. India could be an important customer of its oil too, again.

Sure, India and Iran growing closer would upset their major allies, the United States and China. But these two world’s biggest powers are unequal friends and we all know what’s it to be a junior in a relationship. China and the US are not the baskets in which you put all your eggs in. You don’t do so in any case in international relations and as India has reiterated many a times, today’s is a world of multilateral ties and not bipolar to which the US and China wants the world to be reduced to.

And do leave a thought for peaceful millions of Afghanis who just want a safe existence but are facing a bleak future of Civil War which has raged on anyway for over a generation. Those millions of lives have been left to their own fate, like Yemenis, Libyans, Iraqis and nearly Syrians were: the common thread of a devious superpower appearing in all of them.