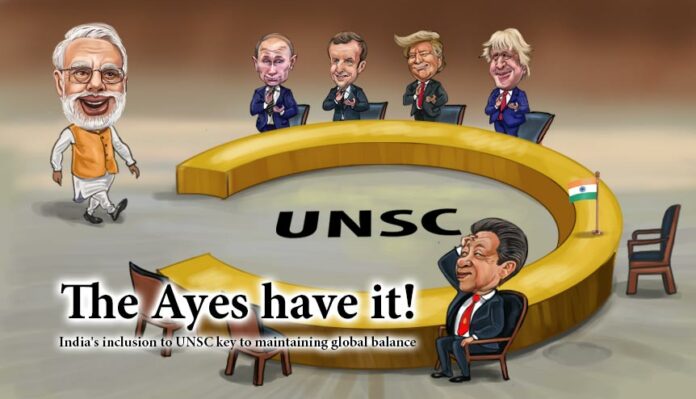 The Pakistani diplomats are apprehensive about India getting Chair of three United Nations Security Council (UNSC) committees, which they believe can be baleful to the interests of Pakistan.

Pakistan establishment, which perceives every Indian achievement as a threat to its interests and even existence, this announcement was immediately seen as a diplomatic setback for Pakistan.Many in Islamabad believe that Delhi would use its presence in the Counter-Terrorism Committee to malign Pakistan, besides complicating the peace process through the Taliban Sanctions Committee.

However, the sting is missing even as India failed in acquiring the hold of few crucial Committees.

A diplomatic source from P-5 countries, on the condition of anonymity said China was against India’s chairing of the Al Qaida sanctions committee. “There was a tussle because of China’s opposition leading even to a delay in the announcement of the committees but India will chair the counter-terrorism committee next year,” said the official. Another diplomatic source said China was the only UNSC member to oppose India’s chairing of the sanctions committee for Al Qaida and affiliates.

The 24 UNSC committees are allocated by the five permanent members through an agreement, as a rule. The committees that India got instead were as a result of compromise. Pakistan was handicapped and with its limited clout to dictate China only, could not prevent India from getting committees of its choice.

However, China too cannot unabashedly oppose  the other four members — France, Russia, the United Kingdom and the United States all the times.

“India’s presence on the Security Council is in itself problematic for Pakistan, but we have made best out of the worst situation. What they wanted would have harmed us more,” a Pakistani diplomat explained during a backroom consultations.

The Counter-Terrorism Committee was given to India in compensation for the Daesh and Al-Qaeda Sanctions Committee. The committee, which will be chaired by India in 2022, was formed in the aftermath of the 9/11 terror attacks.

Quoting Indian envoy to the UN T.S. Tirumurti’s statement, who said: “The chairing of this committee has special resonance of India, which has not only been in the forefront of fighting terrorism, especially cross-border terrorism, but has also been one of its biggest victims,“ Pakistani diplomatic circles are assessing the harm India can afflict on Pakistan.

The Taliban Sanctions Committee had been desired by India, but as its Chair it wouldn’t be really in charge. The committee is almost like a toothless tiger as the reasons for India losing out Chair as — first, the US has already reached a deal with the Taliban and intra-Afghan dialogue is continuing and, second, listing and de-listing are done by the US. Blocking a US move would require a negative consensus of all the 15 members, which is improbable.

Pakistan’s Permanent Representative Ambassador at UN  Munir Akram calls “defensive and offensive strategy” to counter India’s design. Another senior diplomat, who has a vast experience of working at the UN, said on the condition of anonymity, said, “Pakistani mission was faced with difficulty, but not an impossible task. Pakistani diplomats would have to strengthen their networking with other members of the UNSC, especially Niger, Tunisia, Ireland and Mexico, besides keenly following the developments so as to be able to pre-empt something unfavourable. Options are created, they are not presented in a platter he added.

Thus Pakistan, banking on China, which has similar inimical interests against India, is working in tandem to thwart any anti-terrorism steps which India might take.