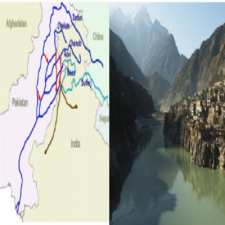 The dastardly Pulwama attack has again led to talks of India abrogating the Indus Water Treaty of 1960 and wage a “water war” against Pakistan to bring it to its knees, since diplomacy seems to have had no effect on the rogue nation.

India seethes for revenge and turning the taps dry on the water-scarce Pakistan seems an easier way to the hot-heads though it’s an option which is in the realms of fantasy.

When then Indian Prime Minister Jawaharlal Nehru went over to Karachi and inked the deal with Pakistan’s Ayub Khan on September 19, 1960, it allowed the mighty Indus river and its tributaries Jhelum and Chenab to be used up to 80 per cent by the troublesome neighbour while 20 per cent (19.48 per cent to be precise) was left with India to pursue its irrigation, agricultural or power generation projects.  (As against these Western rivers of the Himalayan region, the eastern ones of Ravi, Beas and Sutlej was completely left under the control of India by the Indus Water Treaty).

The treaty has survived at least three wars and countless skirmishes for technical, practical and moral reasons which seem unsurmountable however grave the provocation is, as the Pulwama attack certainly is at the moment.

The treaty, brokered by World Bank (then the International Bank for Reconstruction and Development), doesn’t have a termination clause and India can’t revoke it unilaterally. The termination clause can only be inserted when both the parties, i.e. India and Pakistan, agree to it in writing which clearly is out of question.

Practical reasons against the move are no less compelling. If India, being the upstream-controller of these waters, decides to stop or reduce the flow, it sets a precedent for China to do the same on the waters of Brahmaputra rivers which originates from the Tibetan plateau and is under the control of our mighty eastern neighbours. Another compelling reason is that Jammu and Kashmir, being a mountainous region, would be completely submerged if the flow of western Himalayan rivers is unilaterally stopped by India. By an estimate, India needs at least 200 dams to stop the flowing water, the making of which would take many a decades.

The moral reasons are no less overwhelming. Pakistan’s survival depends on these rivers. Though economic reasons are big enough—these rivers keep Pakistan’s textile, sugar, agricultural and industries alive—the repugnance of causing an almost genocide on 20-crore neighbouring population would cause an unthinkable international uproar and intervention of unprecedented scale. It would also affect Afghanistan massively which presently is a critical ally as India pushes past the physical restrictions imposed by Pakistan on its western borders.

It’s a good enough moment to reflect on the massive Himalayan glaciers which are 20 times the size of those found in the European Alps and its melt causes the origins of many a rivers, such as Ganges, Indus, Yamuna, Mekong, Yangtze, Brahmaputra, Irrawaddy and Salween rivers, as also many minor ones, which is vital to the survival of 2 billion people of nine countries (India, China, Pakistan, Nepal, Vietnam, Laos,Thailand, Burma and Bhutan).

Himalayan glaciers are the largest body of ice outside the polar caps. They store about 12,000km of freshwater. Tibetan Plateau/Himalayan Plateau contains contains tens of thousands of glaciers and is rightly terms as the “water tower” of the region. It’s area is 2,500,000 square kilometers which is about five times the size of France. Its rivers stretch about 1000km north to south and 2,500km east to west.

Two examples should further serve as a deterrent. In 2014, Turkey blocked Euphrates river for Syria and Iraq in order to pursue its aims against the Islamic State (IS). Faced with international uproar, it soon enough retraced its steps. In the second instance, Indians ought to remember how violence broke out when the Supreme Court ordered Karnataka to release 3.8 thousand million cubic feet (tmcft) of Cauvery water to Tamil Nadu. (As an aside the volume of water “gifted” to Pakistan is 5,900 tmcft every year).

Pakistan, from time to time, raises the bogey of India messing with the supply of water due to it under the Indus Water Treaty. Pakistan had objections over the Baglihar hydroelectric project on the Chenab river but the World Bank ruled in favour of India. Another was the Kishanganga Hydroelectric project in north Kashmir. Pakistan had moved the International Court of Arbitration at The Hague but nothing came out of it. Last year, Prime Minister Narendra Modi inaugurated the powerplant on May 19, 2018.

The Kishanganga project isn’t too massive in terms of electricity generation—it would produce 1,713 million units of electricity annually—but it amply reflects Pakistan’s Achilles Heels on the matter of water. Whenever floods or famines occur in Pakistan, their politicians tend to blame the dams which India has constructed on these rivers.