Russia on the cusp of being a world power 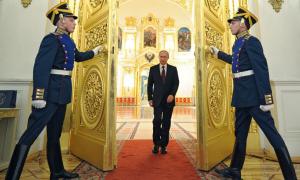 Vladimir Putin has chosen the timing of his intervention in Syria very skillfully. Through his operations in the Middle East, he has the chance to make Russia a world power again. This game is all about the price of oil, and Putin knows: the hand that turns the oil spigot has the last word in all geopolitical issues.

Russia’s intervention in Syria as a means to fight terrorism is only a superficial goal. Unlike the Americans, the Russians calculate their actions with prudence; not just militarily, but geopolitically as well.

A few points to ponder:

Energy is the foundation of Russia, its economy, its government, and its political system. Putin has often stressed the importance of mineral resources for the preservation of Russia’s economic growth and industrial development. Mineral resources are needed to help Russia catch up to the more developed economies and for modernizing Russia’s military, and their defense industry.

Since 1992, the correlation between GDP growth on the one hand and the production of oil and gas, exports and prices on the other has been clearly evident. Russia’s oil and natural gas are not just important for Russia, but for its Eurasian neighbors as well. In 2014, Russia supplied about 30 percent of Europe’s gas and a quarter of its crude oil in 2013.

Besides the raw materials themselves, Russia’s well-developed ground infrastructure for the distribution of these resources is of great importance to Russia. Tatiana Mitrova, Head of the Oil and Gas Department in the Energy Research Institute of the Russian Academy ofSciences (ERI RAS), reckons: “Russia has a unique, transcontinental infrastructure in the heart of Eurasia (150,000 km of pipelines), which makes it the backbone of a vast and developing Eurasian gas market.

The control over both the means of transport as well as the gas reserves makes Russia the pivotal center of this new market.” The land-based oil-distribution network is small, but not insignificant. The 4000-kilometer-long Druzhba Pipeline, for example, covers about 30 percent of total deliveries to Europe. The Russian government is keen on furthering the development of this infrastructure, and has already introduced a number of pipeline projects.

The threats to the Russian energy sector have intensified more and more in recent years and the revenues that Russia is able to draw from the business are under severe pressure. The decision of Saudi Arabia to let the market determine the prices has led to sharp drops in the prices of crude oil and petroleum. The export prices are also affected, which in turn, are what is partly responsible for the switch to hybrid pricing models for gas in Europe.

The charts show how threatening the situation is:

The sanctions ordered by the US against Russia have increased the pressure. Due to the sanctions, Russian energy projects receive no financial backing, nor can projects be supported through the delivery of technology or equipment. On top of that, the US and Canada have already established themselves as strong competitors in oil and gas production, as McEndree has analyzed.

It was therefore necessary for Putin to act. He managed to persuade the rebels in the eastern Ukraine to keep quiet. Recently, they have even canceled the regional elections – brokered by Putin. Lucky for Putin, the EU-funded Kiev government is corrupt and argues mainly about which pockets the EU taxpayers’ money should be flowing into. The EU has to finance the Greek debt at the same time, and is busy dealing with the refugees, therefore neither Germany nor France have an interest in escalating the conditions in Ukraine. They simply can’t afford it.

Putin’s alliances with Iraq, Iran, and especially with China are proof of a certain foresight. With partners like these, Russia can play a leading role in the Middle East. By wisely looking ahead, Putin was also able to involve Israel. Above all, Putin might succeed in breaking OPEC’s power hold. This is directed primarily against Saudi Arabia. The Saudis themselves are busy at the moment with the generation change and are going in a direction so that the young sheikhs can distinguish themselves with an illegal war against Yemen. This occupies a lot of forces and serves to divert their attention.

The question remains to be clarified as to whether the developments in the Middle East could save the Russian energy market. Tensions there are usually linked to the security of transport routes for raw materials. The Middle East itself is primarily dependent on sea transport. Since all waterways include a geographical bottleneck, they are far more vulnerable to external threats than the pipelines used by Russia. By expanding the airbases in Syria, Russia could influence these pathways.

Putin’s action has significantly strengthened Russia’s influence on OPEC.Russia already has close ties with Iran and Venezuela, and soon possibly with Iraq. These countries stand against Saudi Arabia’s decision on oil prices. The Russian Deputy Prime Minister for Energy Policy noted that OPEC members are now suffering from the effects of their own strategy to edge out rivals by flooding the market, and doubts that OPEC members would be really satisfied with long-term low oil prices.

Russia could indeed succeed in splitting OPEC into two blocks, and thus isolating Saudi Arabia. A strategic alliance between Putin and Iran, as well as Putin and Iraq, could create even more opportunities for Russia to put pressure on Saudi Arabia. For one thing, they could test Saudi determination to defend its market. Secondly, by cooperating with Iran and Iraq, one could take over Saudi market shares in the Chinese market. The Chinese market will be the second largest import market, and with its ever-growing demand, it will be of even greater interest to all parties in the next few years.

So thanks to his impeccable timing, Putin could achieve far more than just a military prestige victory over the Americans. Turkey, led by an opportunistic and unscrupulous Erdogan, will quickly bring Putin to its side. The Turkish Stream project is underway. Current delays are not very important; they’re Putin’s threats against Erdogan. So far, Putin hasn’t said anything about Erdogan’s private war against the Kurds. He’s pleased that Erdogan is preoccupied with the Kurds and doesn’t have any corresponding interests with the Americans.

The EU won’t budge. It is now totally dependent on the Russian supply of energy. If Russia controls the Middle East, the talks with the EU will all of the sudden become very constructive for the following reason: there will be two partners sitting at the table for these energy imports with Russia and Iran, and the chaotic EU leadership will be hopelessly secondary.

If the plan works, Russia could actually break up OPEC and thus win access to the oil price. if Putin wins this battle, he has at least a fair chance to have Russia taken seriously as a world power. Big talk coming from the US or the EU is not enough, because what matters in the foreseeable future is this:  the hand that turns the global oil spigot has the last word.