Somebody kills, someone killed but Indian Express can only spot ghosts 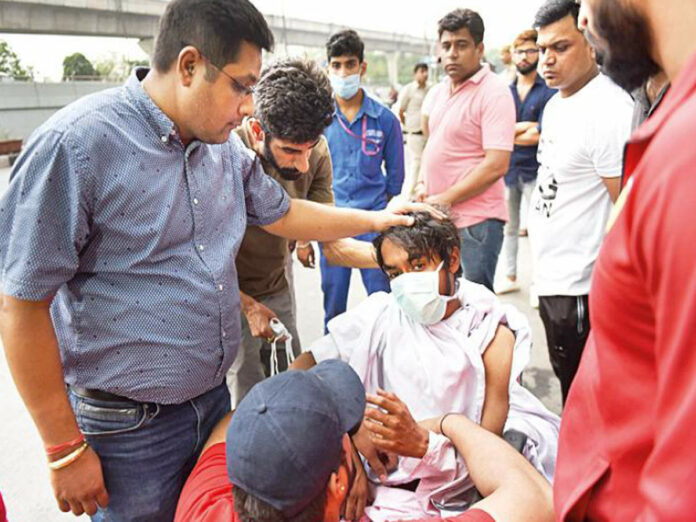 Prime Minister Narendra Modi’s recently gave an interview to Indian Express where he tore apart the newspaper’s claims of being a “Journalism of courage” and questioned their delay in publishing the news of the horrific rape of a Dalit woman in Alwar. “Were you waiting the elections in Rajasthan to get over? He asked the interviewers point-blank (The news of the woman’s rape surfaced on May 6 whereas the crime had taken place in the last week of April.)

Sadly enough, Indian Express and it’s crooked tail can’t be straightened. In just over a week, they once again showed their bias in their reporting the killing of a businessman in the Capital after he objected to his daughter being subjected to lewd comments by a Muslim labourer.

Indian Express has three reports on the sensational murder in its inside pages today but in none of them, the “Journalism of Courage” has dared to name either the victim or the culprits. Same is true of the rest of Lutyens Media, particularly NDTV and Times of India.

It was on Saturday night when the victim, Dhruv Kumar Tyagi was returning home from a clinic, where he had gone for the daughter’s treatment, when Shamsher Alam spotted them and passed a lewd remark. The enraged father, after dropping his daughter at home went to Alam’s house, along with his son Anmol and confronted Jahangir, Alam’s father. However, Tyagi and his son were soon surrounded by the Alam family, and a few others, before being beaten up and repeatedly stabbed.

The criminals also dragged Tyagi’s daughter by hair, who reached the spot a little later. No passer-by or neighbour tried to intercept and some onlookers were busy video shooting the incident.

Tyagi, the head of the family and the sole main earning member of the family, later died due to excessive bleeding leaving behind his old septuagenarian parents, wife, two daughters and a son, who is also battling for life.

Deputy Commissioner of Police (West) Monika Bharadwaj said, “We arrested two persons and have sent them to judicial custody. Two juveniles were also detained and sent to correction home. The main accused’s wife and daughter have also joined questioning. We have recovered the knife used in the crime. And the son of the murdered person underwent a serious surgery and is critical.”

While Tyagi used to own a few shops in the village, Jehangir is a failed businessman. He is currently unemployed and has a few criminal cases against him. Alam is also considered an anti-social element. Four people including Jehangir Khan and Shamsher Alam as well as the two minors have been arrested.

The crime and its media coverage of concealing the names of the perpetrators is similar to the murder of a Hindu boy Ankit, in Febraury 2018, who was in a relationship with a Muslim girl Shehzadi. The boy’s neck was slashed by uncle and father of Shehzadi in broad daylight. However the Lutyens media, at that time also concealed the identity of the killers for a fair length of time.

However, the same set of media is at the forefront when they spot some tragic incident which could bring disrepute to Hindu fraternity. Be it the death of a Junaid or a rape victim in Kathua, The “mombati-gang” is out on our streets. The “award vapsi gang” start making headlines. Editorials start being filled. Remember Kathua, the Lutyens Media had no problem in revealing their identity.  On mere allegations, names of alleged perpetrators had done umpteenth rounds in Lutyens Media.

And here, right under their nose in the Capital, a businessman is killed, a woman’s modesty is outraged and our newspapers have trouble naming either the victim or the culprits.