Trump backs Modi on damning headlines; Now it’s for latter to keep his end of bargain 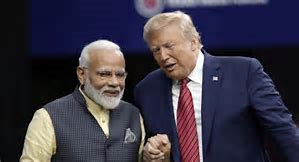 Donald Trump trusts Narendra Modi on issues which make damning headlines around the world. But he won’t be up on his feet till India delivers the trade balance he wants between the two countries.

Trump went away home after two days in India on Tuesday with a ringing approval of the country and “his friend” Modi. He is now looking for India to do its bit to satiate the obsession he is known for around the world—trade.

President George Bush had his neurosis on “war on terror”, Barack Obama on “climate change” but it’s trade for Trump who won’t be drawn, for instance, into Hong Kong as long as he could muscle out trade concessions from China. India shouldn’t expect anything different.

Trade though was on the backburner in the overall theme of Trump’s visit. It was all about a reception unlike “anyone had received anywhere in the world at any time of history,” as Trump mentioned more than once in his interaction with the press on Tuesday evening.

The press corps looked for that one quote which could put Modi in poor light. But it never came. Kashmir was an issue “which has been on for a long time.” Trump was willing to help his two friends—Pakistan’s president Imran Khan and India’s prime minister Modi—if they wished so but to suggest it was an offer of mediation or intervention would be a stretch of imagination.

India’s contentious new Citizenship Act, the reporters were informed, wasn’t even discussed between the two leaders who had met privately in the afternoon. Trump viewed the ongoing violence in the Capital as a matter India could handle.  Of course, religious reforms figured in the talk between them but Trump was mightily assured Modi’s India meant no harm to any religious group.  When a specific question on Muslims was raised, Trump mentioned Modi and his “powerful statement” that Indian Muslims have grown from 140 to 200 millions in a very short period of time.

All this must be music to Modi’s ears. But he would’ve to do his part on trade to keep Trump in similar humour.  The US president noted India had managed to bring down its trade surplus from $23 billion to $14 billion in a short period of time but he expected more. Trump hoped for a trade deal between the two nations by the end of year.

India’s trade advantage vis-à-vis US is miniscule, at least 20 times less than what China enjoys against the US at $345 billion.  Yet it’s an irritant in Trump’s eyes. In 2018, he imposed tariffs on steel and aluminium.  In April next year, India lost its spot in the Generalised System of Preferences (GSP) programme of the United States. It affected India’s exports to the tune of $5.6 billion.

India responded with tariffs of its own on 28 imported items from the United States. It’s high tariff on Harley-Davidson motorcycles, retaliatory moves on farm and dairy products also didn’t go down well with Trump. India seeks to improve its bargaining position in the service industry, have more employment visas for its young and talented. For sure, this is not an exhaustive list of contentious trade issues but just a sample.

To be fair, Trump has been unambiguous about what he expects from the world on trade matters. His inaugural address as President in 2017 was littered with mentions of America’s “foolish” trade policies…which had redistributed its wealth across the entire world.”

The US president looked fresh and eager, up on his toes for the better part of an hour in the evening, fielding questions from the press corps. There was no sign he had as hectic a day as he had endured on Monday, hopping from city to city, and viewing India’s people, culture and monumental masterpieces from close quarters.

On Tuesday, he met India’s president and business tycoons, paid respect to India’s father of nation Mahatma Gandhi at his memorial and oversaw negotiations between the officials of the two countries. His better half and the First Lady Melania Trump at times accompanied him and at other times charted out her own engagement in a local school in the Capital. By late evening, the two had headed for home.