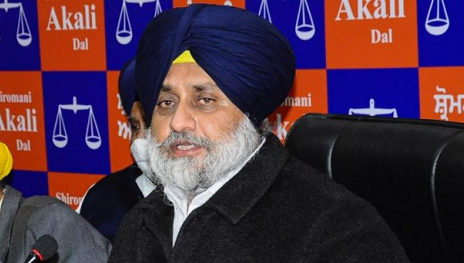 Sukhbir Singh Badal accusing BJP of pitting Hindus against Sikhs in Punjab or even “saying about our soldiers” tomorrow is not a mad man’s rant. It could take a sinister shape in days to come.

The charge itself is flimsy. But to convey that Sikhs are under siege would be the wind Khalistanis need to float and transform this present protest into anything but farmers. This is their best moment in decades to come back to life.

History is best revisited at this stage. Sikhs didn’t number enough in India’s Punjab till 1947. Their numbers swelled when the Partition drove them out from Pakistan. From a high of 19.8% in Pakistan’s districts in 1941, it dropped down to 0.1%.

Sikh historian Harjot Singh Oberoi has argued that Sikhism, historically, has been pan-Indian. Guru Granth Sahib has drawn from works of saints in both North and South India. Several major seats of Sikhism are located outside of Punjab, such as Nankana Sahib in Pakistan, Takht Sri Patna Sahib in Bihar and Hazur Sahib in Maharashtra.

However, in years leading up to the Partition, Sikh leaders realized they could be hemmed in between Hindus and Muslims. Thus began the assertion for a separate identity, the territorialization of a Sikh homeland. Akali Dal passed a resolution in March 1946, proclaiming the natural association of Punjab and the Sikh religious community. Still, Khalistan as a separatist movement only gathered wind in the late 1970s and 80s.

We all know about Operation Blue Star in 1984. It was born out of Anandpur Resolution of 1973. Akali Dal had been beaten in 1972 Punjab elections. They played the identity politics and demanded further autonomy to Punjab. It gathered pace in 1982 when Akali Dal joined hands with Jarnail Singh Bhindranwale and sought implementation of Anandpur Resolution. The public support was whipped up with demands for return of Chandigarh and larger share of water to Punjab.

Remember, Pakistan had been beaten in ’71 War. They had lost out on East Pakistan. They now fanned the wind for a separate Sikh state. Jagjit Singh Chohan, the leader of nascent Khalistan movement, visited Pakistan and met prime minister Zulfikar Ali Bhutto. He received a promise from Bhutto that Nankana Sahib would be made the capital of Khalistan.

Neither funds nor arms were now in short supply.  Pakistan saw in a separate Sikh land their revenge for Bangladesh. The movement fanned out in UK, US and Canada primarily. Operation Blue Star only helped their cause. Sikhs, religious to the last man, were traumatized by the sight of tanks rolling into Harmandir Sahib (Golden Temple). Khalistanis were now on wings. After Indira Gandhi had paid with her life, and thousands of Sikhs were killed on Delhi streets, the separatist movement reached its peak. It gradually petered out due to strong action from India state and internal dissension among Khalistani leaders.

We now return to the present. Even in 1984, when Sikhs were being butchered on Delhi streets, the narrative pushed was that it was Hindus—and not Congress leaders and their lackeys—who had massacred Sikhs. The present farmers’ protest again would be projected as Hindus persecuting Sikhs and not as some MSP, APMC or mandi issue. And it could help Khalistan movement soar again.

Look at it this way. The Modi government is willing to discuss clause by clause, point by point the Farm Acts 2020 and allay the farmers’ fears. The farmers leaders—many of whom are found to have links with Leftists and Maoists—want nothing but repeal of laws. This deadlock could be broken in three possible scenarios:

3-      Or physical force is used to break the deadlock

Now, this is also given that Centre would not use force. It would only use force if the violence breaks out. Protesting farmers in three weeks have shown they would’ve nothing to do with violence. They have been admirably peaceful all this while. But anti-India forces could still infiltrate their ranks and a car burnt here, a tractor razed there, a policeman killed by mob, a farmer lynched would transform this farmers’ protest into something horribly sinister. Prepaid Media has been licking their lips in anticipation.

This is what I suspect is the direction this protest is headed. Sukhbir Singh Badal has made a deplorable call by raking up the non-existent Hindu-Sikh divide. This is where the farmers’ protest is would enter its communal phase—the one I had dreaded about all this while. Look at our burning borders with Pakistan and China; the emergency-like situation in Maharashtra and Bengal. Anti-India forces would settle nothing but for Balkanisation of India. All Indians, and not just the Centre, should rise to this grave challenge.