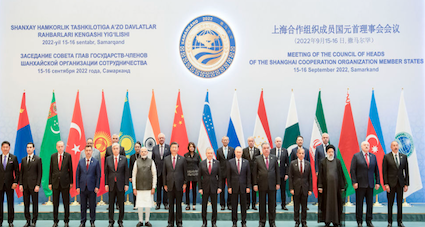 Below could be a help in what you did and what you didn’t read from the SCO Summit in Samarkand (September 15-16, 2022) this morning.

Well, this “global order” hasn’t sent its peacekeepers in the war zones of Ukraine, to keep belligerents apart and civilians alive. Nor we’ve been educated if the US really has biolabs in Ukraine or if the weapons supplied to the Kiev regime by over 40 countries involve “prohibited” weapons in the checklist of UN.

Well, I don’t know how Xi’s words that China seeks “dialogue between civilisations and seek common ground while shelving differences” should be read but in India’s context. And how could support to BRI come when it passes through the contentious PoK (Pakistan Occupied Kashmir)?

And in case you are still spending time on the supposed cold vibes between Modi and Xi, it would do well to remember Indian prime minister highlighting the “unprecedented energy and food” problem partly due to the “Ukraine Crisis” which I am sure we all know is not caused by the Beijing but by the massive US sanctions on Russia.

Try to look at the big picture this way: Trade requires infrastructure and transit corridors and “indivisible security” which the SCO members have committed themselves to: Expect Eurasia to buzz with networks in the making from Indian Ocean to Sea of Oman to Persian Gulf to Caspian Sea and even beyond.

“Indivisible security” could be easily understood for Azerbaijan vs Armenia would still be fresh in mind even if Kazakhstan (January) or eruptions in Tajikistan (May), Uzbekistan (June) is a distant memory.

All this would require financial transactions which are in works despite the sanctions on Russia. An Eastern Commodity Exchange could well be established in Vladivostok to facilitate trade in Asia- Pacific.

All this is a vision of a multipolar world—a multilateral trading system against unilateral protectionist measures.

It’s also certain that the pressure on the trio of China-Russia-Iran would now be exponential by the Hegemon: As it would be on India now that it refuses to tow Washington’s lines.

The approaching winter could well be a trailer to our world in increasing churn.