In case of war, would US rush to India’s defence? 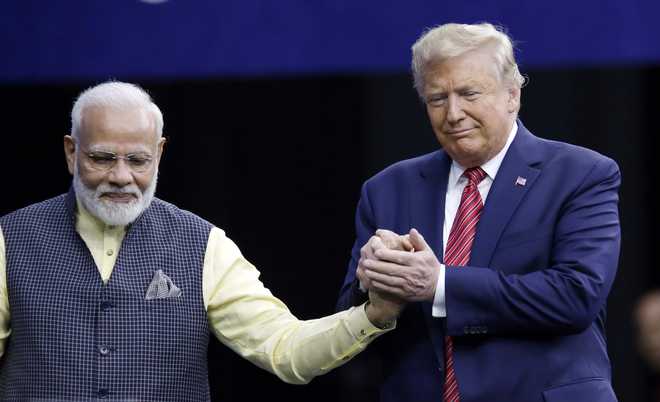 Behind their pandemic-induced masks, Indians have a floating question on their lips: What if China was to pour into India and spank us like it did in 1962.

Columns on military match-ups are box-office hits.  In today’s Mint, weighing scales have measured India and China on nuclear, submarines, armoured vehicles, boots-on-the- ground, everything. It assures readers we are better in inhospitable terrains, fighter jets and in shape thanks to our periodic pounding of Pakistan. It doesn’t look at the weight Pakistan could bring into equation but that’s okay. Indian soldiers are world’s envy for over a century for a reason.

Indians are also hopeful on the United States. That Trump and Modi would look after each other’s backs. This lack-in-self isn’t mindful that India’s nuclear arsenal is deterrent enough. We won’t be rolled over in a conventional war too.  Besides, India doesn’t have a formal military pact with the United States.

Sure, in last decade and a half, the US administration across presidents, and Indians between their Manmohan and Modi, have resembled two lost brothers who couldn’t have enough of each other. It began with access to military sheets (GSOMIA) but ramped up startingly under the Modi regime. An important threshold crossed was reciprocal logistical support (LEMOA) in 2016; and greater Indian access to US military technology (COMCASA) in 2018. The next stage is a deal for 2021 when US could share advanced satellite, intelligence and topographical information (BECA) with India. It would be huge, but not now.

The United States, as it is, has more military pacts than one could count. In the Indo-Pacific waters itself, it’s committed to come to aid of Japan, South Korea, Philippines, Australia and, a little beyond, New Zealand. Western Europe of course is a Biblical commitment in the form of NATO (North Atlantic Treaty Organization). It’s extremely possessive about Central and Latin America and if in doubt, ask a Cuban.  In the Middle East, Israel and Saudi Arabia have the blank cheque of security. Since the Second World War, the United States has committed itself to defend a quarter of the world’s population. All are not cut-and-dried military pacts. But de facto, some 69 countries which is worth 75 per cent of world’s economic output could claim a security umbrella festooned by Washington D.C.

Formal military pacts are dying trends. It forces counter alliances and the world is lit up in smoke as it happened during the First World War. Germany and the Austro-Hungarian Empire were committed to each other against France and Russia and Great Britain was forging secret alliances of its own in a skullduggery which remarkably has been kept hidden by the historians of Oxford who make up the history narrative of English-speaking schools.

So, sorry folks, a military pact between India and the United States isn’t happening all too soon. If the United States enters the Indian Ocean, be sure that China and Russia would commit themselves in equal measure. The US would have its military cooperation, sea drills and logistical shares with India. It designated India as a major defense partner in 2016 itself. The satellite and intelligence sharing under BECA (Basic Exchange and Cooperation Agreement) would be big on its own. It would be a game-changer in communications, navigational and threat assessment. India’s defence exports from the United States are second only to Russia. But don’t mistake it for a joint resistancce against an invader.

We’re in a fluid state. We are not at war with China.  Hotheads could spin it out of control for both, and Pakistan. Looking for the United States or Russia isn’t on the charts spread at military commands of the two Asian giants. Treat the two Cold War antagonists as proteins or steroids in a gym. The heavy-lifting is still left to us. Hopefully the worst is behind us. For the time being.

The lessons for India though are unmistakable. China doesn’t have our good in mind. We would know of the United States too if Russia holds firm and delivers us S400 missile system in 2021. Closer home, we need to free up our armed forces from stifling civil bureaucracy. If they want Rafale, that’s what they should get. We have a huge lag and delay is not an option.