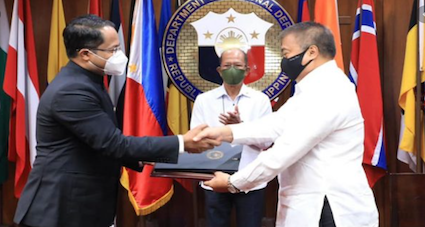 The Philippines has decided  to go ahead with a  planned acquisition of the world’s fastest supersonic cruise missiles, BrahMos, from India that  would sharpen the abilities of Philippines armed forces’ ability to defend coastal areas amid an on-going dispute with China over the South China Sea, according to the analysts.

BrahMos PJ-10,developed  jointly by India and Russia, has the capability to be fired from ships, submarines, aircraft and ground launchers. The missile, which has a range of 290 kms and flies at three times the speed of sound, was tested several times last year by Indian armed forces at sea and on land. Indian army has already deployed a number of BrahMos missiles at points along its disputed and  un-demarcated  Line of Actual Control with China, keeping Chinese People’s Liberation Army (PLA) on back-foot.

This agreement is also a first for India  as it would represent the first major defence equipment sale by New Delhi.

According to Jane’s Defence Weekly magaziine, the Philippine government has announced a defence budget increase for 2021, with the aim to boost military modernisation. It is despite the extra economic constraints stemming from Covid-19.

According to Jane’s website, the funding includes PHP 33 billion for military procurement and military arms procurements. Duterte said in his speech that the 2021 defence allocation is intended to “address threats and combat terrorism”, in a clear reference to the country’s two-pronged security challenge to protect territory in the South China Sea and tackle internal insurgency.

To ease the strings on Filipino government, New Delhi reportedly offered a financially strapped Manila a US$100 million soft loan to acquire the missiles in December, but Duterte was reluctant to accept the offer, given his local political compulsions.

The urgency of this defence deal can be rooted to the claims being made by Beijing over the entire South China Sea, stretching across 3.6 million square kilometers, as its territory. In 2016, the international arbitration ruling had invalidated most of Beijing’s rival claims in the South China Sea.

According to the The Hague tribunal, Philippines has a validated case on the disputed waters of the South China Sea. It had ruled that rocky outcrops claimed by China – some of which are exposed only at low tide – cannot be used as the basis of territorial claims. The tribunal’s ruling said, “Some of the waters were within the exclusive economic zone of the Philippines because those areas are not overlapped by any possible entitlement of China”.

The Hague tribunal accused China of violating the Philippines’ sovereign rights in those waters. It observed that by interfering with its fishing and petroleum exploration and by constructing artificial islands, China has infringed the sovereignty of another country.   However, China had refused to accept the ruling. Since then, the militarization and Chinese aggressiveness in the waters poses threat to the Philippines.