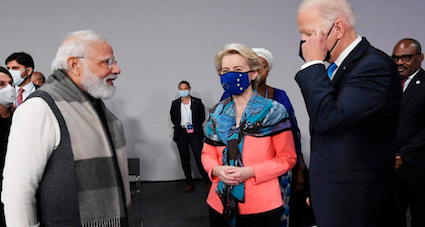 It would tire you just to know who all are coming to New Delhi from Europe this week.

Most of these countries you can’t locate on the Old Continent—-why is Europe called a continent at all when at best it’s a sub-continent like India—and you can’t save your life if the deal is to name their visiting foreign ministers.

The trajectory is not lost on anyone as first the biggies — United States and Germany, then United Kingdom and France—and now the minions who make up what we call is West, is doubling down on India to call Russia names in the Ukraine Crisis.

They have threatened, cajoled, baited and dissuaded to convey that neutrality is not an option and the delusion of sovereignty isn’t permitted to any nation as long as the West controls the world through its Dollar, or call it Pound or Euro if you must.

It’s not just Russia. The West is also sleepless lest New Delhi and Beijing warm up to each other and it can’t divide the house in Asia which controls 40% of world’s GDP.

You only have to look at the world map to see Russia, China and India make up for much of the landmass in Eurasia and if the three were to be joined at hips, the sea-power of West, in conjunction with Japan and Australia, would be left clutching the straws.

The Theory of Encirclement

The genetical makeup of West is to encircle its potential enemy. A Russia must not rest in peace with its neighbours (Poland, Ukraine, Baltics etc); or so do China (Hong Kong, Afghanistan, Taiwan etc). India has just been told about this bitter truth with the replacement of China-friendly Imran Khan in Pakistan with a puppet who is already signing peans in praise of Washington and is dismantling CPEC (China, Pakistan, Economic Corridor) in a hurry.

That the United States has 800 military bases encircling most of the world tell its own story. The other Anglo-Saxon power, United Kingdom, has some 145 bases. Look at the map below and get a drift how Big Brother is always on your toes.

That India has resisted West and if anything, ramped up its trade with Russia, is a defiance which would have consequences. Anarchy for starters in case you don’t see a pattern on our Ramnavmis and Hanuman Jayantis; and economic cost (60% of our GDP is debt) is one thing, the popular unrest amongst youth with ambitions to study and subsequently work in London, Melbourne, Toronto and New York is quite another dimension.

Either You Are With Us; Or Against Us

That much ought to be clear. India could believe on its neutrality as long as it wants but it won’t cut ice with the West. India would be marked as a “hostile” one, as Iran, Russia, China and North Korea have been, and would pay the price.

It would happen in stages though. West, and Europe, would offer goodies in terms of free trade, technology, open doors for Indian students and migrants etc. Victoria Nuland, the hawk in the US establishment, has vowed to wean India away from its military dependence on Russia.

And if all this fails, India would pay.

Is it worth standing up for Russia or China which has lately been pleading for One Asia but is reluctant to pull back thousands of its forces from the Indian border?

The thing is if the two competing blocs currying India’s favour—West vs Russia/China—-offer nothing tangible, India is unlikely to tilt in anyone’s favour. The pressure from the West on India won’t be lost on Beijing and if it is serious to mend its fences with New Delhi, the time to act is now. It can’t even claim a role in Pakistan’s peace overture towards India as it is clearly Washington-engineered.

Ties with Russia is something else. It has stood the test of time despite the language and geographical barrier.  India needs its veto on Kashmir in the United Nations—never mind this global body is a joke now—but pertinently relies militarily on Moscow. The blah-blah on cheap oil and minerals etc isn’t a determining factor on India’s resistance to West.

The trouble is India’s resistance to West is pure logic.

It can see the world has split up in two camps.

It can foresee that Dollar is facing an existential threat.

It has reasons to worry if its assets are in Central Banks of West and are frozen like Russia, Afghanistan or Venezuela’s have been.

It could perceive that the Global South, of which it’s a part with Brazil and South Africa, would come on its own if it survives these final act of Global North’s hegemony.

It’s not a fool to side with the Past when the Future is not hidden even from a blind.

Sure there is a cost to pay in the interregnum. But then whoever said real gain could be without real pain?