Modi’s ‘Adhir Da’ to Adhir Chowdhury has tongues wagging: Is there a new symmetry emerging in Bengal’s 7th phase? 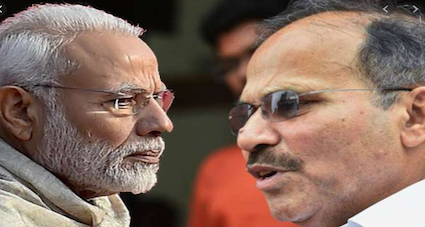 Five districts. 36 seats. Seventh phase. But Murshidabad it is which could flabbergast most.

It is one of the districts, along with Malda and Uttar Dinajpur, which witnessed the Bengal chief minister Mamata Banerjee plead to these Muslim-dominated pockets to vote for her party.

It’s also the district of 11 assembly seats, in which two seats—Samserganj and Jangipur—would have its elections on May 16 due to death of its candidates. Needless to say, the outcome of these two seats would be heavily influenced after May 2 when the fate of rest of the 292 seats would be known.

Now pay attention: As many as six seats in this district—-Farakka, Suti, Raghunathganj, Lalgola, Raninagar and Murshidabad—are Congress strongholds. All of them have sitting Congress MLAs.

But would they stay with Congress? I pose this question to myself having followed a few events closely. Let me sequence them:

Rahul Gandhi appeared in West Bengal for election rally only on April 14 in Uttar Dinajpur district having skipped the first four phases of the elections. Within a few hours of his arrival, Congress-supported independent candidate of Samserganj, Rejaul Haque died. Now why did Congress support Rejaul Haque? More so when it’s backing Modassar Hossain, the alliance candidate of CPM-Congress-ISF? It’s the surest bet for a split vote and could have favoured Trinamool Congress. But with Haque’s death, who was not said to be close to Congress chief Adhir Ranjan Chowdhury, the plot has grown thicker.

Following Haque’s death, Rahul Gandhi left West Bengal. He subsequently cancelled all his campaigns in West Bengal due to Covid-19 surge. In Delhi, we came to know he has tested positive. Almost simultaneously, Adhir Ranjan Chowdhury too caught the Coronavirus in West Bengal.

Prime minister Narendra Modi almost instantly wished Chowdhury for a speedy recovery. Of course he did the same to Rahul Gandhi. But Modi mentioning Chowdhury as “Adhir Da”in his message didn’t go unnoticed. The speculation has acquired a life of its own: Does this “personal touch” by Modi to Chowdhury signify a new wind emerging in Bengal polls?

Congress and Trinamool Congress could both hope for Nabagram but it being a scheduled caste assembly seat, and the pitch BJP has made for their future, could see a change in dynamics. Bhagabangola is represented by the CPM. And finally we have Sagardighi where Trinamool looks unstoppable. The spice though is the presence of Asaduddin Owaisi’s AIMIM. If you had heard Mamata Banerjee pouring venom against the “Hyderabad Man”, the reason is Sagardighi.

So while the intrigue of Murshidabad is fascinating to those who are keeping their ear close to the ground, the other four districts in “action” in the seventh phase on Monday—-Maldah, Dakshin Dinajpur, Kolkata and Paschim Bardhaman—provide a colour of its own.

Malda has six of its 12 assembly seats settled on Monday. Two of these seats on or near the border—Habibpur (ST) and Gazole (SC)—could turn saffron because of the enormous work BJP carried out in these seats before the 2019 Lok Sabha polls. Two sitting CPM MLAs from these constituencies, Khagen Murmu and  Dipali Biswas shifted to BJP which won handsomely in 2019 Lok Sabha polls. The saffron party though must reconcile itself as also-run in four other seats: Ratua and Harischandrapur, Malatipur and Chanchal. The first two could opt for Trinamool while Congress looks a good bet in the remaining two. Malatipur gets spicer with AIMIM throwing its hat in the ring.

The one unknown factor is if Congress and Trinamool Congress work out a clandestine coalition between themselves. If Congress wilfully leaves its Malda seats for Trinamool, Mamata Banerjee could hope for more than two seats in the seventh phase from the district.

Dakshin Dinajpur also has six of its seats lined up for Monday. Trinamool and BJP could trade punch for punch from Kushmandi and Harirampur. Trinamool though has an edge in both seats. BJP could hope that Kushmandi, a SC seat, might flip for the saffron party given the promises it has made in its manifesto. Three seats—Balurghat, Tapan (ST) and Gangarampur (SC)—look a good bet for BJP. Kumarganj appears set in Trinamool’s favour. All these six seats of Dakshin Dinajpur are on or near the border. The trans-border issues thus are significant.

This brings us to Kolkata. It has votes cast for four seats in the seventh phase. Bhawanipore is extremely promising for BJP. The other three could stay with Trinamool Congress. It’s not to discount the chances of former deputy chief of army, Lt. Gen. (retired) Subrata Saha of BJP, from Rashbehari who enjoys a good image. Ballygunge may opt for Trinamool.

It’s Kolkata Port which would be in spotlight though. Controversial Firhad Hakim, ex-mayor of Kolkata, is in fray. Hakim has often caught eye with his vile words and abusive behaviour. He is the one who said he would teach BJP and CISF good lesson once the election is over. This at best is polarization, at worst an incitement to communal riot. Election Commission (EC) would have its hands full in keeping a close eye on Hakim in Kolkata Port.

Paschim Bardhaman, and its nine seats, appear ready to switch from the Trinamool Congress to BJP. The reasons are not far to decipher. Asansol and Durgapur were once leading industrial towns of India. It was termed “Ruhr of India” given its rich minerals, especially coal. There were other heavy engineering and manufacturing industries which added to its crown. But since 1967, the first four decades under Left in support of Congress, and the last decade under Trinamool, has broken its back. Almost all industries have packed up and the coal-belt rich region is under mafia’s control. Violence is rampant. Illegal mining and smuggling is nobody’s secret. Investigative agencies like CBI, ED and NIA are hot on heels of police, politicians and bureaucrats. Most of them are in bed with mafia in this region.

Prime minister Narendra Modi has stirred the imagination of constituents here. He recalled the mammoth industrial identity of the region, paying tribute to Bengali business tycoons such as Sir Rajen Mukherjee and his son Sir Biren. It was Rajen who founded the IISCO (Indian Iron and Steel Company). He also mentioned Murnpur City which fell victim to discriminatory policies of India’s first prime minister Pt Jawaharlal Nehru.

The 2019 Lok Sabha polls provided a glimpse of BJP’s resurgence in Paschim Bardhaman. It provided huge to lead to BJP from all its constituencies. The mayor of Asansol, and defending MLA of Pandabeswar, Jitendra Tiwari had himself joined BJP on March 2. Hopefully this association would help Tiwari wash off his image of being a key man of coal mafia himself. But as said, Paschim Bardhaman for all practical purposes is lost to Trinamool Congress in BJP’s favour.

The memory is also live of December 5, 2020 when a rally by the BJP, against the illegal smuggling of coal from the Asansol-Rainganj belt, was bombed and shot at by hooligans, injuring seven. Similarly, there was this dreadful communal riot in April 2018 when people were taking out a Ramanavmi procession in Barabani. The residences of Hindu locality were vandalised and bombed and they had to come out in open for their safety. Children sat on roads with some “muri” (puffed rice) on plates. The locals knocking the door of Police was of little help.

The locals now could have their moment of revenge with votes cast on Monday.

Without Murshidabad, BJP may win 14 to 18 seats from four other districts in this phase. However, as said, Murshidabad may yield bonus to the saffron party that might flabbergast many.