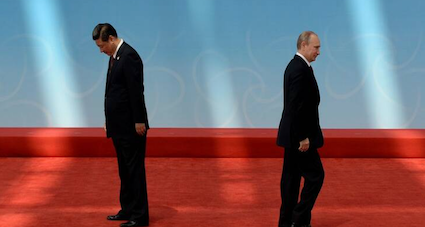 Let’s say the United States would never be happy if China and Russia gain ground in Eurasia which is the lifeline for Washington.

All the major trading partners of the United States are in this region, as are their military bases, which with or without NATO, torch Iraq, Syria, Afghanistan etc running into decades.

It is this part of the world which largely turns a fake currency in Dollar into a legitimate one; never mind if the US has far more debt ($30 trillion) than the size of its economy ($25 trillion) and outstrips China ($18 trillion) and Russia ($4.3 trillion) economy combined.

And that’s because the Greenback is printed when and to whatever extent the US govt wants without a care in the world: As a petrodollar, it’s world’s reserve currency which once in global supply chains transforms itself into a legitimate currency.

So if Dollar goes, so does Eurasia—and Africa which is an add-on and part of collateral damage. And this nightmare would only turn real if Russia and China are not stopped in their tracks.

The Gambit of Proxy Wars

So it was imperative for the US and its allies we call West to throw Ukraine under the bus. Let’s not delude ourselves that Ukrainians would’ve lasted thus far without the aid and arms, money and mercenaries of the West.

Ukraine is a small cost to pay to ensure Europe remains under the US’ thumb, clinging to the lifeline we know as NATO, in fear of the Russian Bear which frankly is from a textbook agenda running for centuries now. It doesn’t allow Germany to get too big—or allied to, god forbids, Russia—a theme which makes UK and France sweat and plunges the world into World Wars.

Each such episodic havocs have been golden harvests for the United States, turning it into a Hegemon that it is, and there is no reason the proven formula stands discarded in our times, never mind your shameful media does its best to keep you drugged.

There are several such Ukraines in Washington’s playbox called Proxy Wars to lit the fire around its other nemesis China which shares its borders with 14 other countries.

It’s not just Taiwan which is a red herring for Beijing. It enormously needs Pakistan to access Persian Gulf for its security and energy needs and which is on brink of civil war after a pro-China Imran Khan was thrown out of office. Presently, its foreign reserves ($9 billion) could barely last a month. It’s begging bowl is no longer passing muster even with its old Islamic benefactors in Saudi Arabia and UAE. It’s lifeline, the International Monetary Fund (IMF), at the beck and call of Washington, is also turning in screws. It has run out of basics such as power, water, paper, fuel or even tea.

We know how Sri Lanka has collapsed; we are aware of how Nepal no longer has a pro-Chinese government; Myanmar is more unstable than ever; and Centra Asia, which is essential for China’s dream project of Belt and Road Initiative (BRI) is facing similar fire within its domains.

Tajikistan recently had its home militants coordinating with extremists from abroad the regime identifies as National Alliance; Kyrgyzstan is being pressurised to accept Afghan refugees; and a recall to whatever it’s worth, Kazakhstan was burning only the other day.

Do we jog the memory of our readers on how suddenly Hong Kong was gripped with the lust for “democracy” one day and un-fizzed the next; how Afghanistan was left in a huff after suffering the GI—and NATO—boots for two decades.

There has been an attempted coup in Solomon Islands and the Philippines has just signed a Maritime Security Framework Agreement with the United States. Only last month, the US president Joe Biden visited Japan and Korea —and not Kyiv if that needs be underlined.

The thing is, China’s history shows it reacts vehemently to wars around its borders—-Korean and Vietnam Wars for instance—and doesn’t mind taking on Soviet Union or India in asserting its territorial concept.

The Beijing is aware how it is being encircled; QUAD or other such frameworks the US has forged in Indo-Pacific. As it is, Japan South Korea, Australia and New Zealand and Singapore are NATO’s “global partners” in the Indo-Pacific; and at least two dozen nations are part of Partnership For Peace (PFP) which is a pre-stage before a non-European nation (Turkey besides) joins NATO.

It’s thus unlikely we would have the Sun of Peace overcoming the Clouds of War in years to come. This is a fight to finish from a Hegemon which only sees in terms of a Unipolar World against a Multipolar World presently in works under the guiding hands of Beijing and Moscow.

And don’t you buy or sell the theory all this is for the “Free World” and “Human Rights”: For purveyors of WMD theory in Iraq would’ve been judged and jailed as war criminals by now.

Or that all this is for some “rules-based international order” which has no legal basis and just a fancy name given by the predators of our world. If anything, it murders the “international laws and conventions” where unilateral sanctions are illegal.