India’s border woes: A legacy of Colonialism, geography and Pakistan 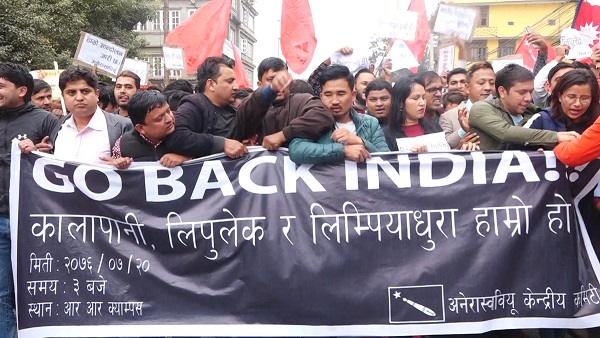 India is shouting from the rooftop it has made no transgressions across its eastern borders in neighbouring Nepal but it has made no difference to latter whose prime minister KP Oli  has joined his citizens who hit the streets in protest last week.

Nepal’s bitter political rivals, Nepal Communist Party and Nepali Congress, are united in anger and so are the students on the streets who are convinced India has swallowed the long-disputed Kalapani area in its latest map which it released in the wake of reconfiguration of Jammu & Kashmir state early this month.

India, meanwhile, has stressed it’s the same map and same boundaries it has depicted all along for over half a century now, including the other disputed territory of Susta in Nepal’s south which for the time being doesn’t get Nepal’s hackles up.

Blame it on geography’s changing moods and the toxicity of colonialism that India finds itself enmeshed in border disputes with not just Nepal but many others in its neighbourhood, including China.

Kalapani, and Susta are territories around Kali and Gandak rivers. After the Anglo-Gurkha War (1814-1816), Nepal and East India Company signed a treaty in March 1816. The two rivers drew the arbitrary borders between these two long-disputed sites. Territories right of Gandak river, including Susta, belonged to Nepal; those on the left were with India. Since then Gandak river has changed course: Now Susta is on the left of Gandak river and hence with India. As for Kalapani, British kept changing the source of Kali river which has led to rival claims of today.

India’s border disputes with China are one of the most protracted ones in the world. Since the first border talks began in 1981 to the latest, the 22nd round, which is due later this year, solutions have eluded the two Asian giants who fight the legacy of British colonialism and are afraid to upset the domestic audience in a give-and-take eventuality.

The two countries share a 3,488-km long unresolved border but two, the Western and Eastern ones, are particularly contentious. China controls 37,000-square km sized Aksai Chin in the West, a virtually uninhabited high-altitude desert; India 84,000 square km-wide populated Arunachal Pradesh in the East. The two fought for a month in 1962 but since a peace deal was struck in 1993, dialogues have been preferred over violence.

Yet, no solution is in sight. Along vast stretches of the borders between the two, there is no mutually agreed Line of Actual Control (LAC). India follows the Johnson Line in the Western sector, proposed by the British in the 1860s, which allocates Aksai Chin to them. China asserts it never agreed to the Johnson Line and thus Aksai Chin is its own. Aksai Chin is between volatile Kashmir and China’s Xinjiang province which are seen troublesome to the two nations. Then there is MacMahon Line in Eastern sector, initiated in 1913-14 between China, India and Tibet which is disputed.

Fortunately, pragmatism has brought about Border Defence Cooperation Agreement between the two Asian giants. Soldiers patrol their territory but back off when brought face-to-face with each other. Quite often military commanders at the border share a bonhomie, exchange views and sort out local issues.

The border dispute between India and Pakistan concern Kashmir and are on since their independence in 1947. Pakistan launched a tribal militia in Kashmir on independence and the ruler of Kashmir, Maharja Hari Singh, sought India’s assistance which put a condition on Kashmir first acceding to India. Having duly secured the accession, India airlifted its troops to Srinagar and by the time cease-fire was secured after a year, India controlled two-thirds of the Kashmir while the remaining one-third was possessed by Pakistan. The status-quo has prevailed despite three wars and as many peace agreements (Tashkent, Simla, Lahore) between the two neighbours.

Bangladesh: All quiet at borders

India and East Pakistan (later Bangladesh) became free from the British empire in 1947 but the two retained thousands of citizens in hundreds of enclaves in each other’s territory. These enclave dwellers lived without any rights or papers, virtually stateless and lacking basics in education, health and security. All this changed for the good when the Indian prime minister Narendra Modi signed a historic pact with his Bangladesh counterpart Sheikh Hasina in 2015. It allowed these thousands of stateless people an opportunity to choose either of the two countries as their own. Land was also swapped between the two nations. The border dispute between the two is settled for good.

Similarly, India had a small dispute with Sri Lanka over an uninhabited 235-acre island, Katchatheevu, which was satisfactorily solved after India formally gifted it to Sri Lanka in the 70s. India has extremely minor border issues with Myanmar and practically none with Bhutan.

The curse of colonialism has left India with border issues which are non-existent, say in a majority of Europe or even between United States and Canada even though the demarcating line between the two countries is a straight one. With strong governments in place, India and China could settle the mutual issues to a great deal. The one with Pakistan though is another matter.