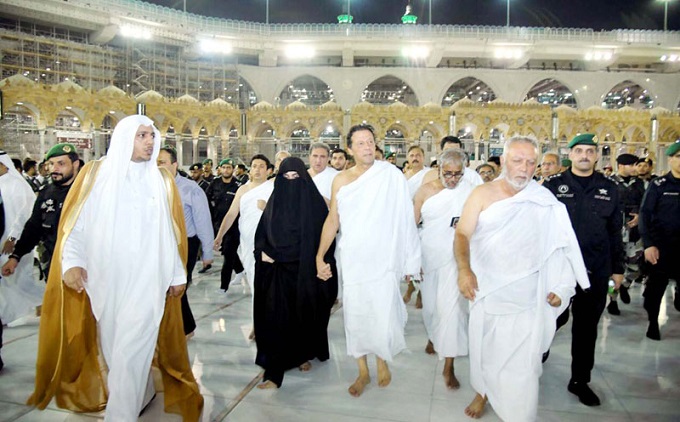 Sniffing a wedge in the Muslim world, after the US brokered peace deal between Israel and UAE, the Pakistani Prime Minister played his card by positioning himself as a state against this pact. Pakistan, the only nuclear armed Muslim country has now taken a stand against the established leaders of Muslim Ummah (leaders) – the Saudis.

In a TV interview to Kamran Khan with Dunya News, Imran Khan adopted an Islamic camouflage, “we are answerable to Allah. How can we disown Palestinians. And that was also the call of Quaid-e-Azam in 1948.” Pakistan, just to keep this in mind, doesn’t recognize the existence of Jewish state.

Turkey, that separated twin from Pakistan these days, has also denounced the agreement, raised the flag on behalf of Palestinians and wonder of wonder is nudging closer to Shia Iran. Malaysia of course is barking from way far in South Asia to stake it’s claim in this Islamic hegemony, dreamt by delusional Turkey. As if Iran would be a bystander. However, history, economics and culture, all stand against Turkey’s strongman Erdogan’s ambitions.

Turkey was one of the first countries to recognise Israel in 1949. The truth was brought home by UAE’s minister of state for foreign affairs, Anwar Gargish who laid bare in public the double standards of Turkey. Gargish has pointed out that both Turkey and Israel share bilateral trade orth $2 billion. Moreover, Turkey has an embassy in Israel and receives inbound five million Jewish tourists every year.

Another aspirant of leadership of Islamic world is belligerent Iran. The anti-Saudi axis which Shia Iran aspires to head would not be possible because of deeply divided religious affiliations.

The main player behind the scenes is a communist China. It is moving Pakistan around as its puppet, asking them to throw their hat in the ring of Islamic leadership and serve their agenda.

China has entered a US $ 400 billion strategic partnership deal with Iran, yet to be passed by latter’s parliament though. China is also investing heavily and keeping most of Middle East nations under the weight of their debt, never mind the ideological religious affiliations on the line of Shia and Sunni. They neither have interest of Iran or Pakistan in mind. All they want is to keep United States weak in the region. One must not forget that China relies heavily on Middle East for its energy needs. Their policy appears to be play one Islamic country against the other. There is little denying it has huge ambitions in the region. And won’t be a silent spectator to developments.

The Muslims from the sub-continent are treated as ‘Hindi-Muslims’ by Arabs. ‘Hindi – Muslims’ is a term used by Arabs as Muslims converted from Hindu religion and thus inferior as the Arabs consider themselves the descendants of the Prophet Muhammad and the flagbearers of Islamic world.

‘The ‘Hindi-Muslims’ imbibe and follow the traditions, culture, way of life of Arabs, then how are they one of us. Actuaries, we are their saviours, ” once said an Arab Islamic scholar.

On economic front, Pakistan does not have a standing. According to bureau of Emigration and Overseas Employment, around $20 billion remittances are brought home through Saudi Arabia and UAE alone.

With 19 lakh workers in Saudi Arabia, 12 lakhs in UAE, 1.12 lakhs in Bahrain, 2.34 lakhs in Oman—all Gulf nations who are now tilting towards Israel openly—one wonders why Pakistan is willing to put everything at stake. It could not be anything else but China browbeating them in the background. Forget trying to be Islamic world’s Ummah, Pakistan in essence is China’s puppet.

Sanjay K Sharma is a close watcher of developments in Pakistan. He would now write regularly on our pages.